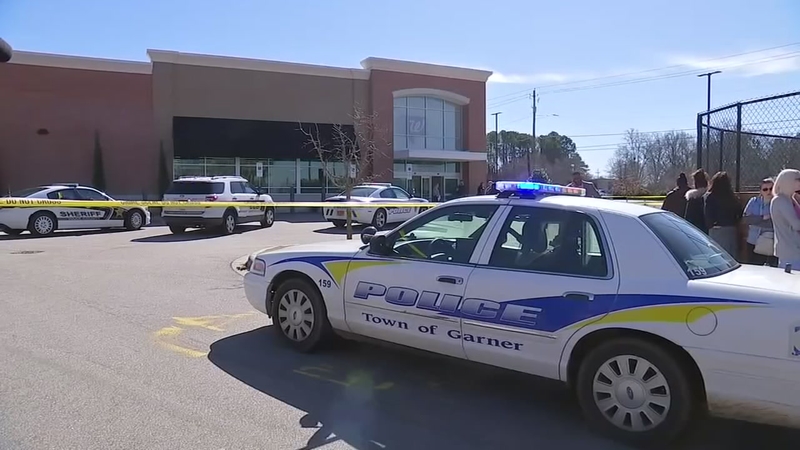 Two shot at Walgreens in Garner, suspect caught at Golden Corral in Raleigh

WAKE COUNTY, N.C. (WTVD) -- One man is in custody after being shot by a Wake County deputy following a shooting that injured two Walgreens employees in Garner on Thursday morning.

Investigators said the shooting victims, 31-year-old Sarah Wright of Clayton, and 33-year-old Brandon Gordon of Garner, were found at the pharmacy inside the Walgreens. The victims were taken to WakeMed with serious injuries.

Garner police said one of the victims is in critical condition. They did not specify which victim was in the more serious condition.

Stephen Alan Denning, 60 of Garner, has been charged with one count of attempted murder and one count of assault with a deadly weapon with intent to kill inflicting serious injury. More charges are expected, Garner Police said.


Garner police said there was "some sort of confrontation prior to the shots being fired."

"I think that the suspect posed a threat to anybody he came in contact with, obviously. He had just shot two people. We're unsure of the motive for that so we're unsure of what he might have done after that," Garner Police Capt. Joe Binns said.


Multiple people related to Denning identified him as the man police arrested before investigators released his name. The SBI and the Wake County Sheriff's Office later confirmed that Denning was the suspect.

"He was just trying to get his medication correct, and they wouldn't give it to him and it went from there," Denny's cousin Jeffrey Baker said.

Baker said he doesn't understand what could have caused the violence.

"Steve is a family man. When you see him, he would give his last to anyone," Baker said. "Just know that he's not a bad person. He's just like anybody else. I mean he's a human first. He's not a monster or anything like that, just take care of his family."

"I would always go over there talk to him, chat with him, cook with him," Baker said. "We would be out in the yard playing basketball in the back. We would also go shoot pool--me and my cousins, him and another cousin over there that's there now. This is a side that I would never ever, see him doing. What the police are saying, I think is just absolutely wrong."

#Breaking—Family members of Stephen Denning, 60, of Garner, tell me Denning is the man who has been accused of shooting 2 Walgreens employees. His cousin, Jeffrey Baker, tells me this is out of character for Denning. There is police presence on Denning’s street. #ABC11 pic.twitter.com/pcgzM4lf86

Investigators said Denning was taken to WakeMed after he was arrested at the Golden Corral on Tryon Road, which is about two miles away from the Walgreens where the shooting happened.

"Our thoughts and prayers are with the victims and all of those who were affected by this unfortunate incident," Golden Corral told ABC11 in a statement. "We are grateful for the quick response of the authorities. The restaurant was closed when the suspect was apprehended and no guests were in danger. We have made counselors available for our co-workers who were in the restaurant. The safety of our guests and co-workers is always our first priority."
EMBED More News Videos

Raw interview with officials on shooting that injured 2 in Garner

Wake County Sheriff's Office Spokesman Eric Curry said the State Bureau of Investigation is now part of the case. He also confirmed that a deputy shot Denning at some point during the incident.

Curry would not confirm or deny if the officer who made the arrest was the one who fired his weapon.

The shooting came as a surprise to Garner residents.

"I can't believe that's happening here at this Walgreen(s)," one woman at the Walgreens said. "I mean, you know nothing ever happens in Garner. I'm so sad."

Walgreens issued the following statement after the shooting:

Walgreens later said the store will remain closed while police investigate and the pharmacy chain will be providing counseling for store staff.

Pharmacy patients who normally use this location can have their medications filled at the store at 825 Timber Drive in Garner, Walgreens said.

"Our thoughts and prayers are with our team members who were seriously injured this morning," Walgreens told ABC11 on Thursday evening. "We are thankful to the first responders as well as the emergency medical staff at WakeMed hospital where our team members are being treated. We are cooperating fully with law enforcement in its investigation and refer you to the police for any information on the incident."
Report a correction or typo
Related topics:
garnerwake countyarrestsbishootingdouble shootingdeputy involved shootingwake county news
Copyright © 2021 WTVD-TV. All Rights Reserved.
TOP STORIES
Attempted robbery blamed for Black Friday shooting
Troubleshooter helps Wake Co. native fix erroneous $6,000 NC tax bill
Pedestrian killed on US 401 identified as Rolesville HS student
Amber Alert issued for missing 13-year-old NC girl
WakeMed expands access to monoclonal antibody therapy
LATEST: 9 states report cases of the Omicron variant
Show More
Fayetteville police seek suspect who sexually assaulted woman
Woman battling stage 4 cancer realizes dream of being a firefighter
Raleigh lab is 1 of dozens looking for COVID variants in US
Fugitive task force searches for parents charged in MI school shooting
Cause of Pilot Mountain wildfire discovered
More TOP STORIES News