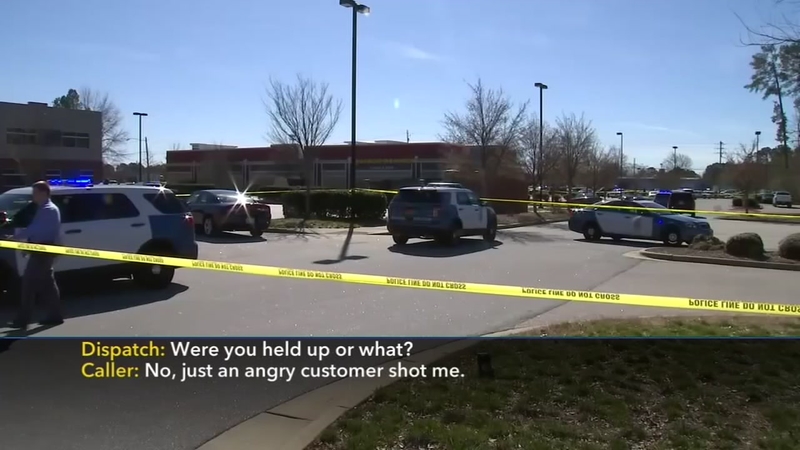 GARNER, N.C. (WTVD) -- Newly-released radio traffic sheds insight into the police response after two employees were shot Thursday inside the Walgreens on US-70 in Garner.

"Raleigh to Garner units, have a shooting at the Walgreens," said radio traffic from Garner. "... They're advising the pharmacist was shot."

The radio traffic describes what happened shortly after the suspect was shot by a deputy.

"Shots fired at the Golden Corral," said Raleigh radio traffic. "... Have everybody else who is not here back it down. Back it down. We are 10-95."

JUST IN—A spokesman for @Walgreens tells me they plan to reopen the store, where 2 employees were shot yesterday, on US 70 in Garner NEXT WEEK, but do not have a specific date yet. They’re asking pharmacy patients go to the store at 825 Timber Drive in Garner. #ABC11 pic.twitter.com/nleXgpOwAc

The Garner Police Department said one of the victims, 31-year-old Sarah Wright, of Clayton, is stable. The Walgreens website said she's been with the company for 11 years and is a pharmacy manager at the Walgreens on US 70 in Garner.

Brandon Gordon, 33, of Garner, is in critical condition at WakeMed.

Wright called 911 and told a dispatcher an angry customer shot her.

Garner Police and the suspect's cousin said there was an argument about medication.

Police found the suspect, 60-year-old Stephen Denning, in the parking lot of the Golden Corral in Raleigh.

Officials said there was an altercation and a deputy shot him.

Garner Police said Denning faces charges of attempted murder and assault with a deadly weapon with intent to kill inflicting serious injury and that more charges could be filed.

His cousin, Jeffrey Baker, said Denning was recovering in the hospital. Baker said his heart goes out to the victims and their families and that this is out of character for Denning.