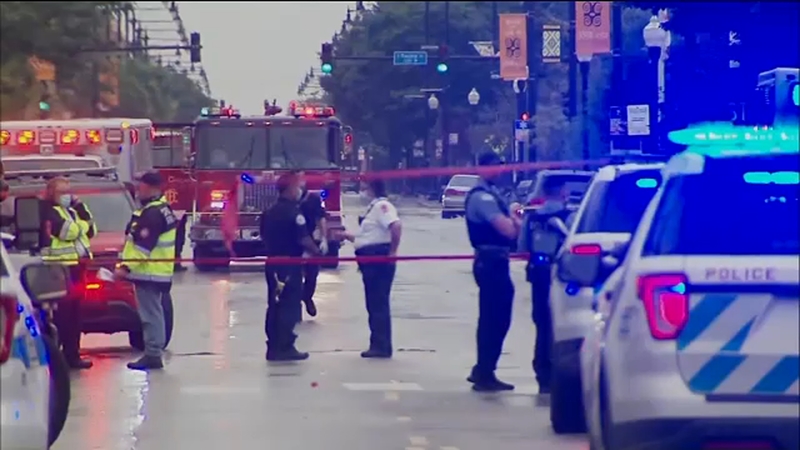 CHICAGO, Illinois -- The eruption of gunfire outside a funeral home on Chicago's South Side that left 15 people wounded was part of an ongoing conflict involving the gang of a young man being mourned and a rival gang, police said Wednesday as the federal government planned to send more agents to the city to combat a spike in gun violence.

Chief of Detectives Brendan Deenihan said the man whose funeral people were attending had been killed in a drive-by shooting last week and that he was killed in retaliation for a previous shooting.

Police said people were outside a funeral home in the Gresham neighborhood Tuesday when three people pulled up in a stolen car and two of them opened fire. People at the funeral returned fire, the car crashed a short time later and the three occupants fled on foot, police said.

Police Superintendent David Brown said at least 60 shell casings were recovered following the shooting, which happened despite police having two squad cars outside the funeral home - a precaution the department regularly takes at funerals involving a gang member or those linked to gangs - as well as a tactical team deployed to the neighborhood.

"We had intelligence that the deceased was killed in a drive-by shooting ... and there was a gang connection and we deployed our resources accordingly," he told reporters at a news conference.

All those shot were adults. Police said Wednesday that two were in critical condition and the other 13 who were injured are expected to recover. They have said one person of interest was taken in for questioning Tuesday night and on Wednesday police declined to provide further details.

The shooting comes as the Department of Homeland Security is planning to deploy dozens of federal agents to Chicago to deal with a significant uptick in violent crime in the city. Neither Brown nor Mayor Lori Lightfoot commented at the news conference on the planned increased federal presence in the city.

Lightfoot, after threatening to sue if President Donald Trump acted without her permission, had noted on Tuesday that the city would be working with federal agents to fight crime.

Lightfoot has been skeptical of federal agents being sent to Chicago by Trump due to the controversy in Portland, Oregon, where the Trump administration sent federal officers after weeks of protests there over police brutality and racial injustice that followed the killing of George Floyd in Minneapolis.

Lightfoot said she expects Chicago will receive resources that will plug into existing federal agencies that already work with the city, including the FBI, Drug Enforcement Agency and the Bureau of Alcohol, Tobacco, Firearms and Explosives.

Trump has framed such protests in the nation's large cities as a failure by "liberal Democrats" who run them, praised the officers' actions and said he was looking to send agents to other cities.

He pointed to rising gun violence in Chicago, the nation's third-largest city, where more than 63 people were shot, 12 fatally, over the weekend.

More gun violence struck early Wednesday. A few miles away in the city's South Shore neighborhood, a 3-year-old girl was hospitalized in serious condition after being shot in the head while riding in a vehicle with her parents, police said. Her parents told police two people fired at them from a corner. No one was immediately arrested.

Tuesday's shooting highlighted what Brown said are hundreds of gang conflicts that occur everywhere in the city involving 117,000 gang members, dozens of gangs, hundreds of gang factions and well over 2,000 what he called sub factions.

As police and city officials in the past have done repeatedly, Brown and Lightfoot implored people with information about the shooting to report what they know to police before what authorities fully expect will be another attack in retaliation for Tuesday's shooting.

"Someone listening has information that will help prevent the retaliation that unfortunately is probably being planned at this very moment," Lightfoot said.