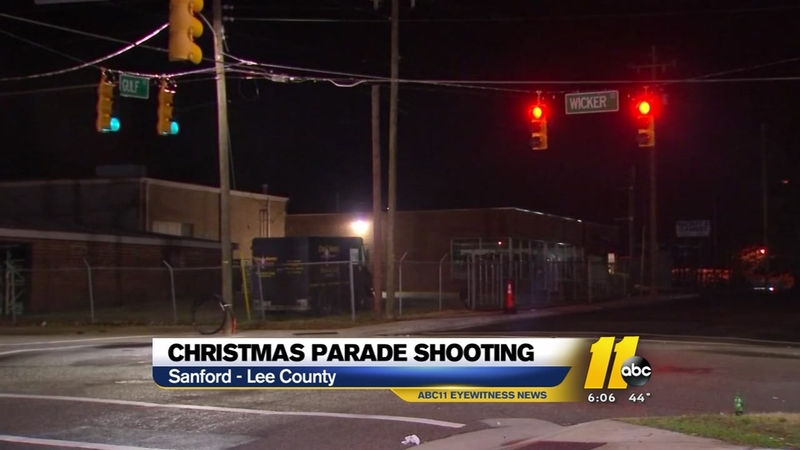 SANFORD, North Carolina (WTVD) -- Sanford's Christmas Parade, one of the oldest in the area, was marred Monday night by gun violence that left two people injured and sent parade-goers scrambling for safety.

Sanford police officers who were working the annual Christmas Parade heard several gunshots near the 100 block of South Gulf Street. Officers saw a man firing a handgun at another man.

Officers chased the suspect north on Gulf Street and after a brief foot chase, the suspect was taken into custody, said Sanford Police Capt. Harold Layton.

The victim, identified as Sean Dimitrius Matthews, 18 of Sanford, was found suffering from several gunshot wounds to his lower abdomen area, arms and leg. He was taken to CCH ER and later flown to UNC Hospital in Chapel Hill for further treatment.

Matthews was listed in critical condition.

Another victim was struck once by gunfire in his arm. Jadakis Tysor, 16 of Sanford, was taken to CCH ER in a personal vehicle and treated for his injury.

Police charged Deion Jamille Johns, 20, of the 1500 block of Westover Drive in Sanford with one count of attempted murder and one count of felony assault with a deadly weapon inflicting serious injury. Johns was also charged with three misdemeanors which included discharging a firearm within city limits, possession of a weapon at a parade and going armed to the terror of the people.

He was being held in the Lee County Jail under a $1.5 million secured bond after a court appearance Tuesday.

Johns' next court appearance is set for December 14.

On Tuesday, the mayor of Sanford spoke out about the shooting.

Mayor Chet Mann was at the parade when those gunshots rang out. Tuesday, he reassured the town of Sanford of their resilience while promising a thorough look into what could have been done differently.

"I think this is more isolated rather than a thing that could've been prevented, but we're going to look at things we can do different," Mann said. "Personal responsibility goes a long way in how people conduct themselves and Sanford is not about all this."

While the mayor looks at ways the community can bounce back, business owners who heard about the chaos say they know Sanford as a down-home All-American town.

"I was shocked here in a small community. This is a great community but sometimes these things do happen," said Tommy Wicker.

On Monday evening, an eyewitness told ABC11 that they heard between four and seven gunshots and people scattered as police descended on the scene.

The eyewitness, a business owner, said at least one person, later identified as Matthews, was lying on the ground in his store's parking lot.

The Christmas Parade was cut short because of the incident.

Another ABC11 Eyewitness who did not wish to be identified said she heard seven shots. She said there were two shooters and that police took one person into custody. Police made no mention of a second shooter.


SHOOTING AT SANFORD PARADE: Not more than 200 feet from where I was standing. 5-8 gunshots, fatalities unknown, pure chaos #SanfordShooting

Zach Berly, who said he was at the parade, told ABCNews he heard what he believed to be between five and eight gunshots ring out.

He said police quickly appeared on the scene and began directing traffic away.