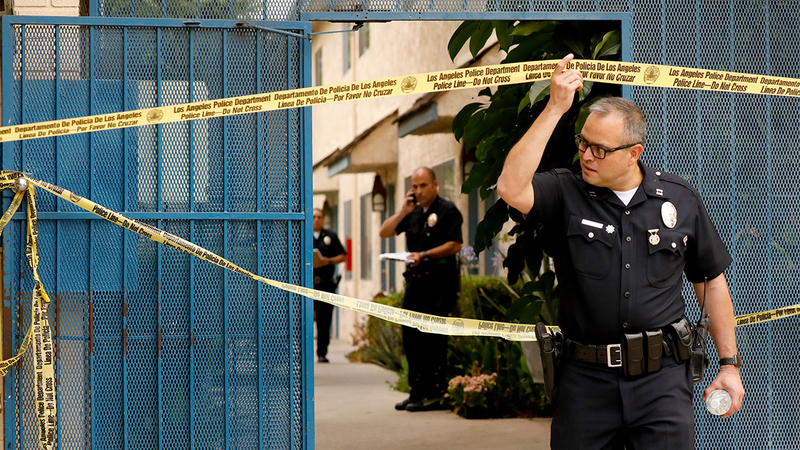 LOS ANGELES -- A man fatally shot his father, brother and two other people Thursday during a 12-hour rampage across Los Angeles' sprawling San Fernando Valley, eluding a manhunt until he was arrested after gunning down a bus passenger, authorities said.

Police said they did not know what motivated Gerry Dean Zaragoza to launch the attacks in neighborhoods dotting the vast, largely suburban valley that is home to nearly 2 million Los Angeles residents.

"It is obviously an individual that went on a violent spree," police Capt. William Hayes said. "We knew he was a danger to the community."

Police said Zaragoza, 26, killed his father and brother and wounded his mother at an apartment complex in Canoga Park, a modest neighborhood in a southwest section of the valley.

From there, he traveled several miles to North Hollywood, where he gunned down two people, police said. A woman believed to be an acquaintance of Zaragoza was killed and a man was critically wounded.

Hours later, police said, Zaragoza shot and killed a stranger on a bus in Van Nuys, in the center of the valley.

Michael Ramia said Zaragoza's father, Carlos Zaragoza, had worked for him for 12 years as a carpet cleaning technician.

He described the elder Zaragoza as "a guy with no enemies, very outgoing."

"The nicest guy you'd want to be around," he said.

Ramia said Carlos Zaragoza had confided in him that his son was battling drug problems, adding that the older man often tried to get his son to come to work with him but he seemed to have no motivation.

"He was a father just trying to protect his son," Ramia said. "He did it to his last day. He wouldn't give up on his son."

"Really hurt, about what happened," she said.

Zaragoza is also suspected of an attempted robbery outside a bank in Canoga Park. Police said no one was hurt and nothing was taken.

He was arrested in a commercial section of Canoga Park about 12 hours after the rampage began. Hayes said officers used what he called a small amount of force to subdue him.

Television footage showed the suspect sitting in a wheelchair and appearing alert as he was loaded into an ambulance.