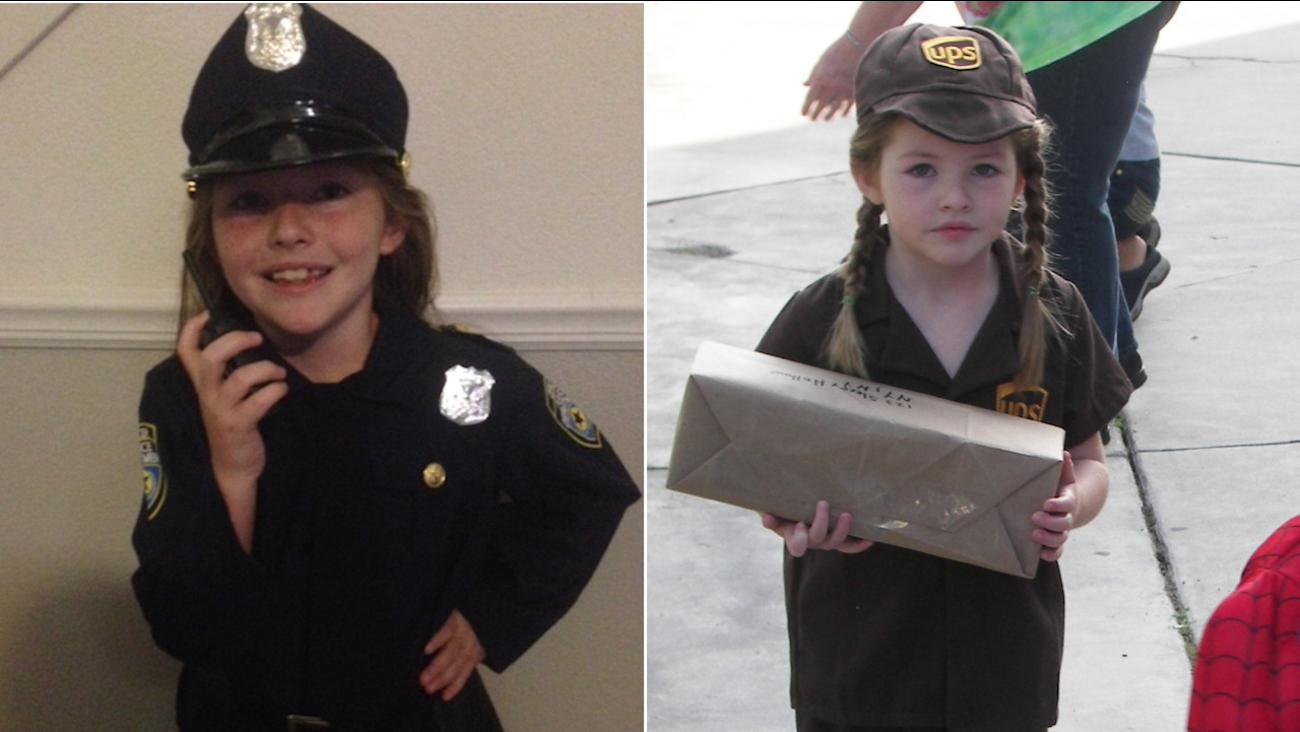 Shaelyn Adams, left, dresses up in a cop costume for one Halloween and a UPS driver for another. (Shawna Beck Adams/Facebook)

Shaelyn Adams, 7, of Fresno, Calif., has been a UPS driver, an astronaut and a doctor for Halloween, so needless to say she likes to dress up as a career woman.

While shopping for her costume choice this year -- a cop -- Shaelyn noticed something. The boy cop costume came with pants, while the girl one was a dress. This prompted Shaelyn to write an open letter to the company, her mom said.

"I think you need more simple costumes like a fire fighter and a police in pants for the girls," Shaelyn offers in the letter, which her mom posted to Facebok. "Maybe the career costumes should have a section by themselves, and not be labeled boy and girl."

Shaelyn's mom, Shawna Adams, told ABC that she complimented the boys outfit Shaelyn picked out, saying it resembled the real uniform worn by their neighbor, a female Fresno police officer.

"She [Shaelyn] then asked me why the pants costume was only in the boys section, when real female officers wear pants," Adams said. "I told her that I didn't know."

When Shaelyn continued the discussion on the ride home, Adams said she suggested that her daughter write a letter, not thinking Shaelyn would follow through. But she did.

Adams said she helped her daughter research the career costume offerings on the company's website, and they found that there were more than 20 boy career options versus six for girls.

"The costumes available were a waitress, a pop star, a 80's pop star, a police officer in a dress, a boxer and a doctor," Adams said. "She thinks they can do better."

In the letter, Shaelyn, asked Party City to consider adding more career-inspired options for the girls section, or perhaps abolish gender labels altogeher in favor of a "career" section. Critics have accused Adams of helping Shaelyn write the letter, Adams said, but she said her daughter loves to write and penned the letter herself.

"The other thing critics say is 'just buy it from the boys section.' To that I say...You are missing the point," Adams explained. "She never had an issue with it until this year. She is old enough and smart enough to question it."

Party City did not respond to ABC's request for comment, but Adams sent ABC the response she got:

"We apologize if we've offended you; it is not our intention. Our product assortment and merchandising is driven by consumer demand and popular culture and with thousands of Halloween costumes, we know there are costume solutions for every taste, style and budget and will share your feedback with our web merchants."

This is not the first letter to Party City about the gender labels on their Halloween costumes that has gone viral. In September, a mom's Facebook post was widely shared after she also asked the company to reconsider their girls cop outfits, saying, "Toddler girls are not imagining and hoping that they will grow up to become a 'sexy cop.'"

Meanwhile other retailers, such as Disney, have opted to use "for kids" rather than gender labels on their Halloween outfits.

As for Shaelyn, her mom said she's grown from the experience. When asked what she'd learned, she said, "I learned that if you see something that's not right, you should try to change it."