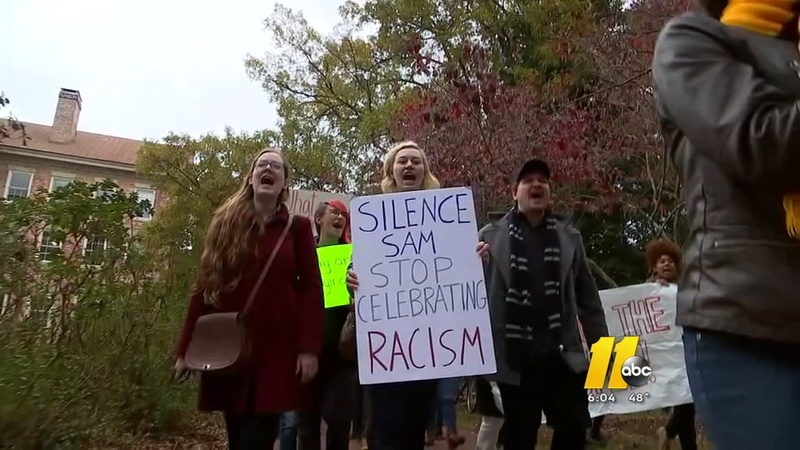 CHAPEL HILL, North Carolina (WTVD) -- Some UNC students said they think the university is trying to silence them in the fight about the Silent Sam Confederate statue, and they marched through campus Tuesday to send a message.

A group of about 100 students and community activists chanted "What side are you on?" as they passed by Chancellor Carol Folt's office.

"We're not going to stop," said protester Michelle Brown. "I don't feel comfortable walking by this statue every day."

"It's like we're criminals who did something wrong," said protester Destiny Green. "There were tents, people were talking with each other, having dialogue with each and discussion. It was very peaceful, so why they needed to infiltrate just doesn't make any sense to me."

University officials would not grant interview requests from ABC11 but referred to a statement released last week, which said in part, "The recent use of an undercover officer on our campus was limited in both time and scope and was necessary because of extraordinary circumstances that included the very real potential for a violent outbreak at any time."

Several students are going to speak out at the UNC Board of Trustees meeting Wednesday morning.

A New York-based law firm representing a dozen students and a professor has sent a letter to the university threatening to file a lawsuit if the statue isn't removed.

Joel Curran, the UNC-CH vice chancellor for communications, said in September, "We do not have the unilateral legal authority to move the monument."

ABC11 has decided to slowly reduce the number of stories on the website that have a comments section. We believe very strongly that our audience should have an opportunity to discuss and debate events in our world, however, we have not been able to moderate the comments as well as we would like. Instead of hosting a platform that could allow a few loud and ugly voices to dominate a conversation, we want to encourage everyone to join us on our social media platforms and speak out there. Facebook: facebook.com/ABC11 Twitter: twitter.com/ABC11_WTVD
Report a correction or typo
Related topics:
educationchapel hillorange countycollege studentschapel hill newsprotestuncdemocratsconfederate monumentconfederacy
Copyright © 2022 WTVD-TV. All Rights Reserved.
TOP STORIES
Heavy rain, winds knock down trees, power in parts of central NC
Durham police investigate fatal shooting, crash along NC 55
Congresswoman announces $3M for strollway between Chavis, Dix parks
Duke pediatrician warns about baby formula shortage impact
Homeless veterans get an assist from Durham's Rotary Club
Truck slams into NC woman's new home
Supreme Court ruling results in 'tragic loss' for death row inmates
Show More
Shelf cloud seen in Raleigh ahead of line of storms
New NC flood monitoring system ready for next big storm
Father puts 1,000 miles on his car to find specialty formula
Student says he was told not to mention 'Don't Say Gay' law in speech
Clayton police arrest man in shooting that injured 1
More TOP STORIES News