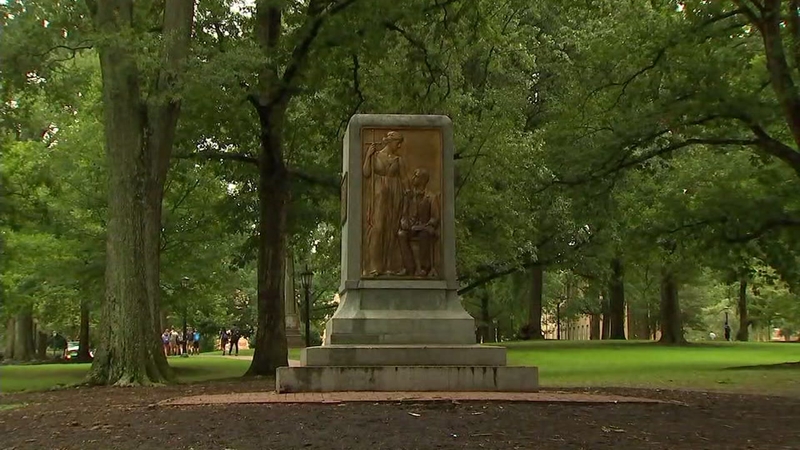 CHAPEL HILL, N.C. -- Silent Sam is no longer standing tall on The University of North Carolina at Chapel Hill's campus.

The pedestal is the only portion of the statue left, which stood on campus grounds for more than a century.

There’s no activity near the place where #SilentSam #Confederate statue stood for more than a century on the #UNC campus in Chapel Hill. Coverage of its toppling and reaction, all day today online and on @ABC11_WTVD #abc11 pic.twitter.com/9RevGRDImx

The Confederate monument was removed Monday night as more than 250 protesters gathered on campus, chanting for its removal.

It was a source of frustration for many students and community members while they waited for university leaders to take action - a frustration that became too much to bear, causing the group to take matters into their own hands.

Cheers erupted as the Confederate statue came tumbling down.

"'Thank you, Jesus' - that's what went through my heart when I seen the statue come down," one man said.

Many students, faculty, and alumni have called the statue a racist image and asked officials to remove it, though some argued it was a tribute to fallen ancestors.

While Governor Roy Cooper had called for the removal of Silent Sam, and other rebel symbols on public land, he did not approve of the statue's destruction.

"The Governor understands that many people are frustrated by the pace of change and he shares their frustration, but violent destruction of public property has no place in our communities," a tweet from his Twitter read.

The Governor understands that many people are frustrated by the pace of change and he shares their frustration, but violent destruction of public property has no place in our communities. 2/2

The university echoed the sentiment in a statement issued after the statue came down.

"Tonight's actions were dangerous, and we are very fortunate that no one was injured. We are investigating the vandalism and assessing the full extent of the damage," the university said in a tweet.

A message from Chancellor Folt on the Confederate Monument: https://t.co/Qp42b6410P pic.twitter.com/T3HoBCEfXw

A state historic panel is set to meet this week to debate Cooper's request to remove other Confederate monuments at the state Capitol.

Officials have not said if legal action will be taken agaisnt the protesters.