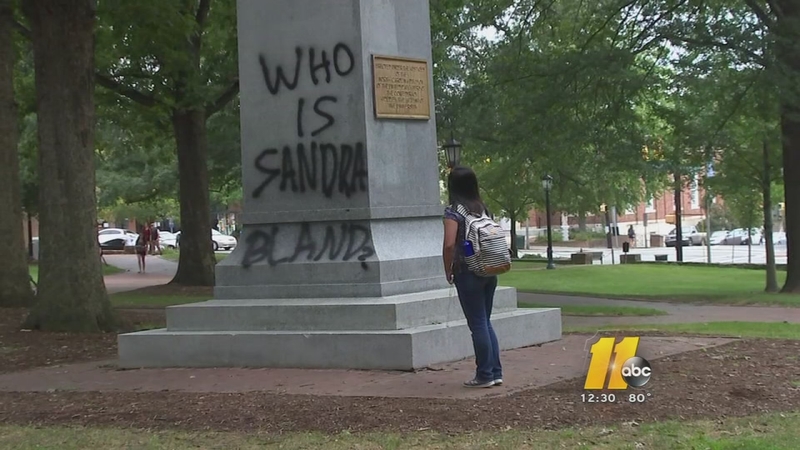 CHAPEL HILL (WTVD) -- Police are investigating after someone spray-painted the words "Who is Sandra Bland?" on the "Silent Sam" Confederate memorial on the campus of UNC Chapel Hill. The E. Franklin Street post office was also spray-painted with the same words Tuesday.

Bland was found hanged last month in a Texas jail and her death has sparked protests around the country. Many have disputed how it happened and alleged racial violence against Bland, who was 28 years old.

"I think everyone should know who Sandra Bland is, especially with all the racial tension going on and the questions about whether black lives do matter," Carrboro worker Lindsey Moore said.

The words "who is Sandra Bland" are discovered on Silent Sam, a statue on the UNC campus Tuesday, August 18, 2015.

But some people who see the painted words question the wisdom of defacing public property to make a social point.

"It is a place where people go, both to celebrate the achievements of the past and also to protest," retired lawyer D.G. Martin said. "About what place the monuments of a 150-year-old war that is important to a lot of people for many different reasons, and that maybe the discussion of that can be a healthy thing for us."

Lindsey Moore had mixed feelings about the vandal's choices for the spray painted display.

"It's a good thing someone's pointing it out, but I wish it wasn't in a graffiti type of way," she said.

It is not the first time the statue at UNC has been vandalized. Over the July 4th holiday someone spray-painted the words "murderer" and "black lives matter" on Silent Sam.

Numerous area Confederate monuments have been targeted around the Triangle since the removal of the Confederate Flag at the South Carolina Capitol.