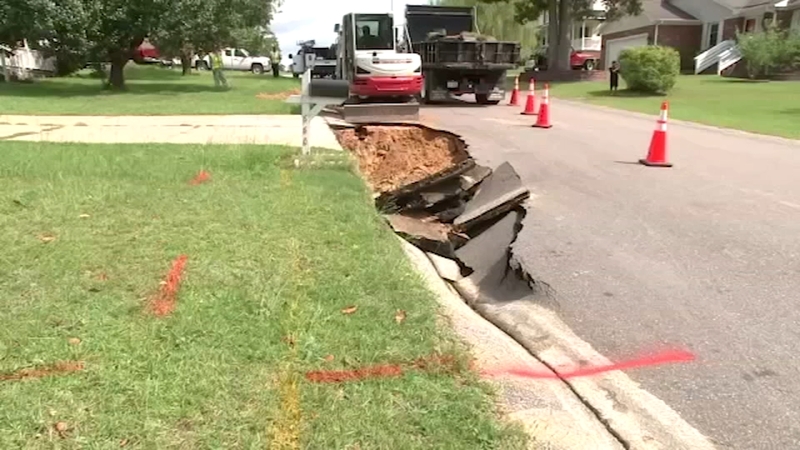 FAYETTEVILLE, N.C. (WTVD) -- A 10-foot sinkhole that opened in a Fayetteville neighborhood early Wednesday afternoon is drawing concern from residents in the Middle Creek subdivision in Fayetteville.

"I called the city and they told me to call the water company and they said they couldn't do anything until morning and told them if they waited then we would have a sinkhole," Williams said.

Right now crews are working to repair a gaping sinkhole that opened up in one Fayetteville neighborhood. One neighbor said he called Aqua yesterday about a crack in the pavement, he woke up to this hole that grew by the hour #abc11 pic.twitter.com/Axl1ZofcvF

"We have a sinkhole. We have a mess," Williams said.

Williams lives directly across the street from the sinkhole. His neighbor moved his car to higher ground. Other than a few cones marking the worksite, Daharan Drive was still open.

"Just the integrity of the road we're worried about because the whole road was saturated like it rained and it hasn't," Williams said.

Speaking of rain, the dirt from the washed-out road has settled in the Williams' family stream.

"If that doesn't get fixed then the water is going to rush into our property because that really saved us from the hurricane last year," Williams said.