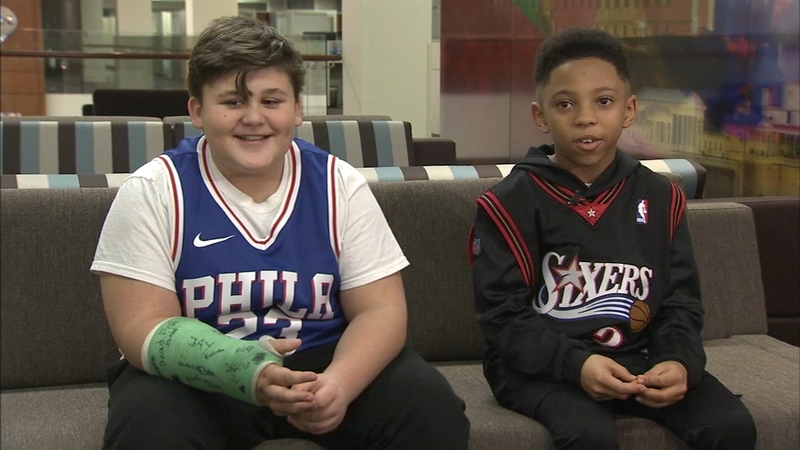 SOUTH PHILADELPHIA -- Your feel-good moment of the day comes courtesy of an epic dance-off that's become a bit of a thing at Philadelphia 76ers games.

Fans said in the fourth quarter, the same two kids, 10-year-old Dominic Prybella and 9-year-old Anthony Stuard, get in a dance-off from across the arena.

And it happens a lot.

The crowd loved Monday night's competition, and so did the NBA-- tweeting the boys' jumbotron antics for all of the internet to see.

They've become a viral sensation with a video of their dance battle being viewed 2 million times - and counting!

The boys have actually dueled many times from their seats, but they have never sat down face-to-face and talked until they met at WPVI on Tuesday.

And they both said since Monday night, it has been a whirlwind.

"At my school, my friend saw it on the news. He said, 'There's this kid that was on the 76ers game and he looks just like you. I can't believe he took his shirt off.' I was like, 'That's exactly me,'" said Anthony.

The shirts did come off, with mixed reviews from their parents.

"All of a sudden Dominic took his shirt off, which he's done before so I was OK with that," said Anthony's mom, Toni Stuard. "I wasn't surprised. They kept dancing. Then all of a sudden, Anthony starts pulling his arms out and I didn't know what to do! I wanted to cover him up!"

The boys showed Action News reporter Trish Hartman their moves including The Floss and the Orange Justice.

The parents said they never expected this, but they love that the 76ers give their kids a chance to shine.

"It's all about the kids," said Dominic's father Stan Prybella. "It's all family-oriented. It's really a good time."