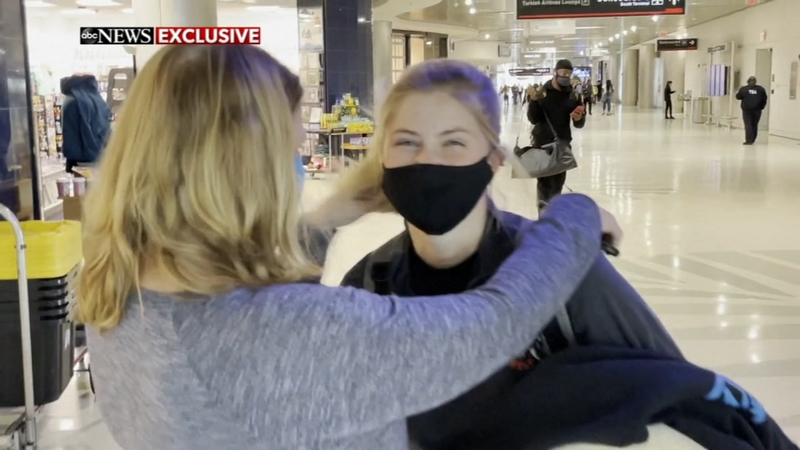 The 18-year-old sentenced to two months behind bars in the Cayman Islands for breaking quarantine rules is now apologizing for what she did.

"It was a selfish decision. There's no reason that I can give you to grant me a second chance. I don't expect anybody to ever forgive me, but I would like for them to at least let me be able to show them that I did learn from it," Sylar Mack said in an interview with GMA.

Mack traveled to the Caribbean island Nov. 27 and, per island rules, was required to quarantine for 14 days.

But after two days in isolation and a negative COVID-19 test, Mack removed her wrist monitor, breaching quarantine to watch her boyfriend -- a professional jet skier -- compete in a race.

"It was a conscious decision...can't give you any good reason for it," Mack said.

Both Mack and her boyfriend, 24-year-old Vanjae Ramgeet, who was charged with aiding and abetting, were detained and initially ordered to pay a fine and serve 40 hours of community service.

But after a legal back and forth, the couple was sentenced to two months in prison, ultimately serving 32 days.

"I deserved it. I was like, 'You know what I made this mistake and it sucks, you know, but you did it to yourself,'" Mack said.

To this point, Mack has never tested positive for COVID-19 and it does not appear anyone at the beach got sick that day. However, Mack admits if something bad had happened, she would've been responsible.

"I would've never been able to live with myself, knowing that I could've been the reason that someone could've--even just been sick, it eats me up."

Meanwhile, her family is just happy she is safe and back in America.

Now that her granddaughter is back in America?

"It's the biggest relief I finally slept through the night," her grandmother said. "And it's kind of hard to fall asleep when someone you love so much you know that they're not sleeping, and that they're uncomfortable and I know she's a tough girl but she had to be scared."
Report a correction or typo
Related topics:
coronavirusjailcovid 19 pandemicprison
Copyright © 2022 ABC News Internet Ventures.
TOP STORIES
Icy roads a morning threat as temperatures dip into the 20s overnight
Monthly tax credits end, leaving some NC families forced to make cuts
Omicron surge hasn't peaked nationwide: US surgeon general
Triangle Restaurant Week returns to highlight local small businesses
Deputies investigate shooting at Harnett County home
Jewish community strives to 'stay strong' after Texas synagogue terror
LATEST: Long lines for COVID testing -- is it worth the wait? Maybe
Show More
Dozens of RDU flights canceled through Monday evening
Free virtual class on Martin Luther King, Jr. may surprise you
Already delayed, North Carolina primary could be moved to June
Woman killed after being pushed in front of NYC subway train
Man arrested, charged with Christmas Day murder in Edgecombe County
More TOP STORIES News