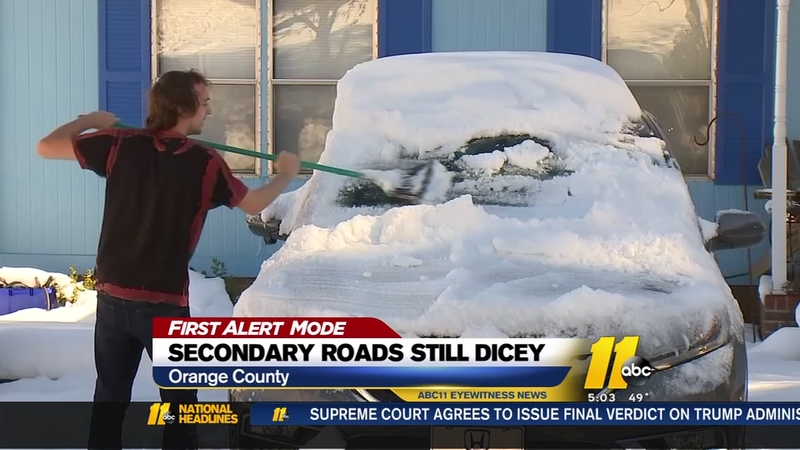 Clear the snow off your cars before you drive!

North Carolina Highway Patrol and state emergency management are asking people to make sure they clear the top of their cars.

Some folks out and about Friday had several inches of snow on top of their cars. Others were working hard to get the stuff off.

"Well, the top mainly because if you're in traffic and it blows off, and hits somebody else in the windshield, it's not very nice," said Hillsborough resident Lea Jones.

"I know like, when I'm driving behind cars and stuff, it's just flying off at me, I'm kind of nervous something is going to crack my windshield, like ice," said Christian Wright, also from Hillsborough.

According to the North Carolina Department of Public Safety, there is no state law that addresses snow and ice falling off of cars.

When this happens, it's treated as a "roadway hazard."

It's why the Highway Patrol "strongly urges" folks to clear off their entire car before hit the streets.

#BeSafe in this #ncwx snow. Be sure to completely clear your car so you don't cause problems for others when you drive. pic.twitter.com/89ixc1k1hZ

"I'm not really fond of that," Wright said. "The fact that like, I can do everything I want to in my power to avoid it happening to someone else, but if it just happens to me, I'm kind of like out of luck."
Report a correction or typo
Related topics:
travelhillsboroughncorange county newsnc highway patrolsnowroad safetydrivingnorth carolina news
Copyright © 2021 WTVD-TV. All Rights Reserved.
TOP STORIES
Streets of Southpoint reopens Saturday after shooting that injured 3
UK, Germany, Italy report cases of new omicron variant
3 killed, 1 arrested in Robeson County shooting
Fire destroys guitars at house of Avett Brothers' father
Rep. Lauren Boebert issues apology for anti-Muslim remarks
Ahmaud Arbery's mother speaks out after murder trial verdict
Show More
Small Business Saturday is a lifeline for Triangle shops
Girl paralyzed in porch swing accident now helping other injured kids
Mother reunited with family after more than 7 months in hospital
Christina Applegate shares message on 50th birthday after MS diagnosis
Holiday shipping deadlines to get packages mailed on time: LIST
More TOP STORIES News