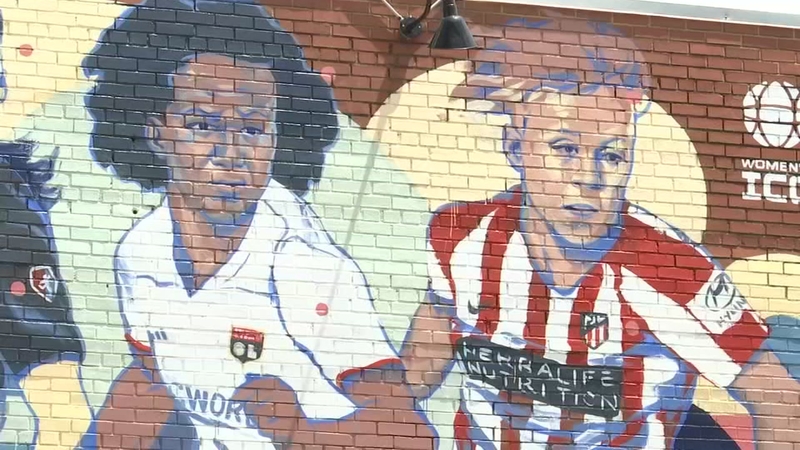 RALEIGH, N.C. (WTVD) -- A mural in downtown Raleigh promoting next month's Women's International Champions Cup has drawn a lot of attention as well as praise from some of soccer's biggest stars.

"That was actually pretty cool and unexpected that it got spotted," Taylor White, the Raleigh artist who painted the mural, said about the social media attention her work has garnered.

The mural, which is near the entrance to Morgan Street Food Hall, has been shared by US Women's World Cup champion and NC Courage forward Jessica McDonald, French star Wendie Renard, and Manchester City's United States-focused account.

I was just roaming the streets in Raleigh and saw this!!!!!! I’m amazed at whoever did this!!! 🙌🏽🙌🏽🙌🏽 @iccwomen @IntChampionsCup @TheNCCourage pic.twitter.com/pCJt9Sgqqg

Katie Hambrick was one of the people to stop and take a picture Wednesday afternoon, and shared what the mural meant to young girls.

"She has this on her street where she can walk by it and see females that lead and are powerful. That's something I didn't have as a kid," Hambrick said.

Can't wait to see all of these players in @iccwomen in Aug., alongside many more of our returning @FIFAWWC stars!

The US Women's team captured the World Cup in early July, helping reignite a debate about equal compensation for male and female athletes.

"In terms of women's recognition for their achievement in sports, I think it's very important to bring attention to that conversation and help people understand how they can drive women's earnings. It's not enough to know that they deserve it, it's how to create that demand," White said.

The painting took a week to complete.