Some claim racist undertones in shading, position of hands on political post 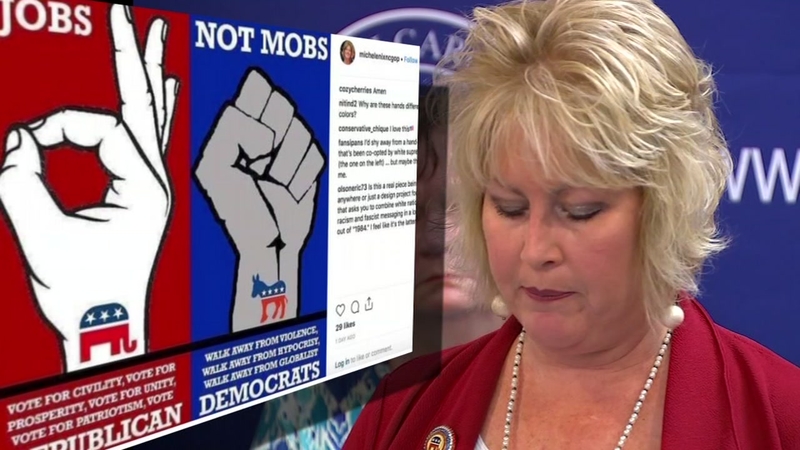 An Instagram picture posted recently by NC Republican Party Vice President Michele Nix is raising concern among some on the opposite side of the political spectrum.

The picture shows two hands, one Republican, the other Democrat, lifting up symbols that share a wide variety of meanings.

Those critical of the post claim the light-colored hand represents a symbol commonly embraced by white supremacists. The darker fist on the other half is often associated with blackness, black power or militants.

The message above the images: Vote for jobs..not mobs.

ABC11 spoke to independents about the image.

Carli and Trevor Keling are moderates who sometimes lean Republican.

"it could be construed as racist, but at first glance, I didn't notice it all," said Trevor Keling. "There could have been a little more thought put into it."

Garrett Taylor, also an independent, said the post was thoughtless.

"This is the reason why the GOP is doing so poorly in minority communities when they really could be doing so much better," Taylor said. "They keep losing us on messaging because they keep playing into these types of symbolisms and stereotypes."

In a statement, NCGOP Executive Director Dallas Woodhouse said critics were simply attacking Nix and that cries of racism were politically motivated by Democrat supporters:

"This is a continued effort to "Kavanaugh" good people for Democrats political purposes. They are picking on a well respected community leader in Eastern, North Carolina. In Michele Nix's view, that was a communist symbol.

Republicans do not see race in every equation. The modern Democratic Party does and it's unhealthy.

This is exactly what people will be voting against on Election Day."

Democrats are fighting back.

"If you're in communist China or Russia, you use the symbol of a communist party. We're neither. We're North Carolina. Let's focus on the issues facing North Carolina," said Sen. Floyd McKissick.