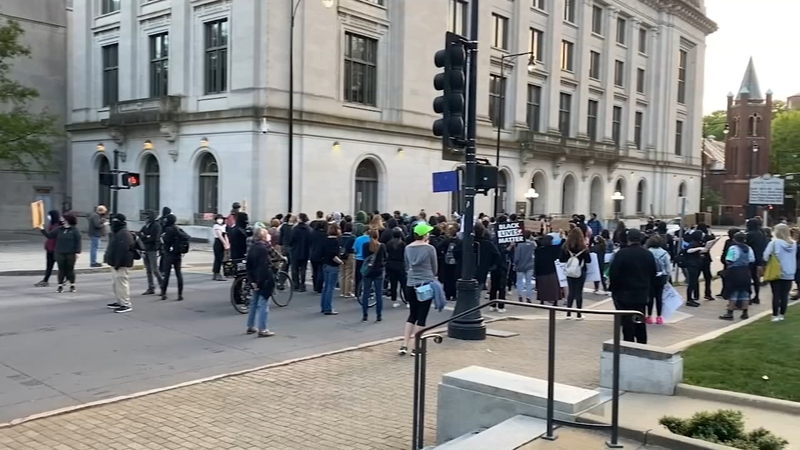 RALEIGH, N.C. (WTVD) -- Raleigh had a second night of uneventful demonstrations on Saturday evening while downtown Durham cleaned up and made repairs after Friday night protests led to graffiti and vandalism.

Such scenes are taking place in many cities across the nation as tensions remain high amid the Derek Chauvin trial, demonstrations continued Thursday and Friday near Minneapolis and Chicago over the police shooting deaths of 20-year-old Daunte Wright and 13-year-old Adam Toledo.

Durham cleans up after a night of vandalism. Some business owners boarded up Saturday for protests that did not materialize in the Bull City.

In Raleigh, protesters assembled near the governor's mansion. Dozens upon dozens of people gathered to protest what they deemed police brutality. The group held signs and marched peacefully through the downtown area calling for change. Demonstrators stopped traffic at times and weaved around cars.

Demonstrators now in the heart of Downtown Raleigh on Harnett Street as RPD trails behind. #ABC11 pic.twitter.com/FJvl5qxnDv

Raleigh Police trailed behind, keeping an eye on the crowd.

One person who spoke told the group he lives in fear and worries for his safety.

The Wake County Black Student Coalition put out a "call to action" for a second night.

Scene from the demonstration, which is just getting underway outside the Governor’s Mansion. #ABC11 pic.twitter.com/17rGuYfDzo

Wake County Sheriff was in attendance at the demonstration site for the second consecutive night.

A few dozen people are gathered now outside of the Governor’s Mansion - taking a stand against police brutality and pushing for reform. #ABC11 pic.twitter.com/pVRM8HLCDl

After a Friday night of minor destruction in downtown Durham, some business owners took no chances and chose to board up their doors and windows on Saturday.

Bill Browning, an attorney at law, said one of his law firm's windows was smashed and spray-painted on Friday evening.

"They've had some pretty peaceful protests down here and that's pretty nice when that happens, and it's a shame when a couple of folks create a bad name for the city or the protests," Browning told ABC11.

Browning said this is the first time his law firm has been damaged, something he says other nearby storefronts, unfortunately, can't say.

On Friday, protests were peaceful in Fayetteville, where organizers made a point that speaking out against injustice did not equate to violence or destruction. Demonstrations in Raleigh also remained peaceful but in Durham, there was some damage downtown.

The 100, 200 and 300 blocks of East Main Street had damage, police said. Windows were broken by objects thrown through them and buildings and signs were spray-painted in acts of vandalism.

Durham Police Headquarters and the old courthouse were also vandalized with spray paint, and protesters burned a flag in front of police headquarters.

Several demonstrators are gathering outside of @NC_Governor’s mansion in downtown Raleigh. I’m told they are standing against police brutality and with the families of #AdamToledo and #DaunteWright. Some are holding signs. All are wearing masks. It’s peaceful. #abc11 pic.twitter.com/gNgQrJL2fl

In downtown Raleigh, an anti-racism demonstration started outside the Governor's Mansion at 6:30 p.m.

VIDEO: #AdamToledo was in 7th grade. That’s what the sign reads that this demonstrator just created. #abc11 pic.twitter.com/xZzMgteb3G

VIDEO: I asked @WakeSheriff Gerald Baker why he is here. He told me because he is in support of #BlackLivesMatter demonstrations. Listen. #abc11 pic.twitter.com/nrWDaGByUy