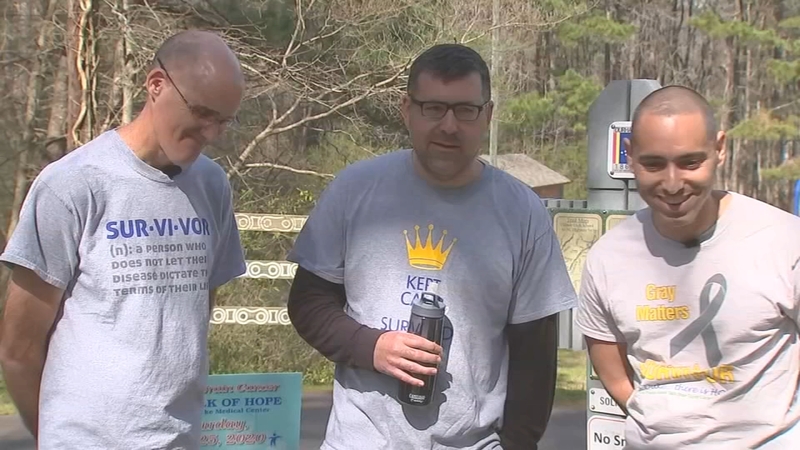 3 brain tumor survivors treated at Duke to run marathon together

FAYETTEVILLE, N.C. (WTVD) -- Three men who went through cancer treatment are planning to run a marathon in support of Fort Bragg soldiers.

Tom O'Donnell, Jeff Bradford, and Nestor Paonessa will run the All American Marathon in Fayetteville March 29. The three men are all brain tumor survivors who were treated at Duke's Preston Robert Tisch Brain Tumor Center.

"I feel like I owe it to Duke, and to all people with brain tumors and to all people, you know, just in general, I owe it to them to show them what I can do as a survivor," said Jeff Bradford who was diagnosed with an oligodendroglioma in 2009.
The All American Marathon will be the first for Bradford post-treatment, but he ran two marathons before his diagnosis.

O'Donnell said he began running after he was diagnosed with an oligodendroglioma in 2009 .

"So, I started running just a little bit before I went in for my first surgery," O'Donnell said. "Because I wanted to have the memory of what it felt like in case I couldn't run again."

Once O'Donnell came out of surgery and could move, he decided it was time to start running.

When O'Donnell runs the All American Marathon, it will be his 30th to date. In April, he will run his eighth Boston marathon.

"I felt like exercising was more powerful than the drugs that I was taking to fight my tumor," O'Donnell said. "I still believe that."

Paonessa, diagnosed in 2015 with a glioblastoma, said he was perhaps in the best shape of his life when he received his diagnosis.

"I had just run my first two ultra marathons," Paonessa said. "I did a 40 miler and a 50K, and had just done the Inca Trail hike to Machu Picchu with my wife in Peru, just did all these cool physical hard challenges. And then a month later, I was diagnosed with brain cancer."

Paonessa continued to run through his treatment, even doing a 100 mile ultra-marathon during which he had to take a chemo pill in the middle of his run.

"I had an alarm go off and I had to take my pill and keep running," Paonessa said.

The three men say their biggest influence in being endurance athletes is Greg Sousa. Sousa was an Ironman and triathlete who often biked to his brain tumor treatments at Duke. He lost his battle to cancer in 2016.

"Greg taught me how to be, how to be as a brain tumor survivor," Paonessa said.

By sharing their story, all three hope they will inspire others to just keep going.

"That's the biggest thing," Bradford said. "That goes for everybody on the planet. Nobody is guaranteed tomorrow, so you might as well live today to the fullest. Because you never know."

The three will also take part in Angels Among Us, a 5K and fundraiser for the brain tumor center at Duke on April 25. The men say that day at Duke is their most meaningful race of all.