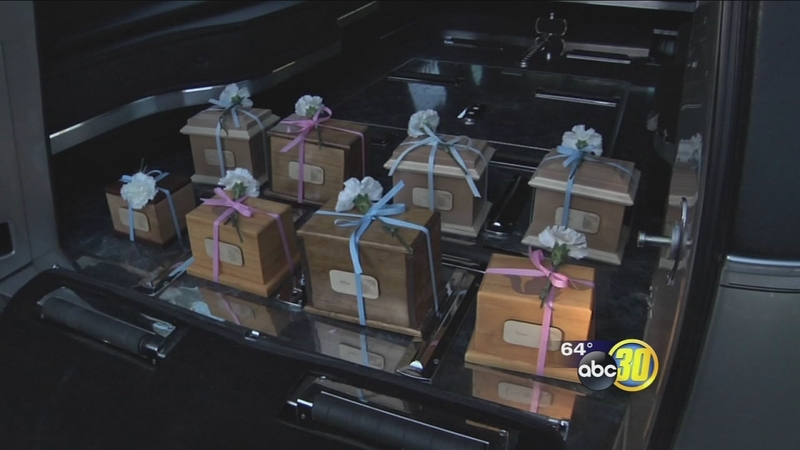 FRESNO, Calif. -- Eight Fresno County children who died without families got full burials Saturday in the Garden of Innocence. It's a ceremony that gave each child a new set of brothers and sisters.

Inside a series of wooden urns are the remains of eight children -- once abandoned, unidentified and alone at the Fresno County Coroner's Office.

"Could come from a hospital in a stillborn situation that the family walks away from them, but we aren't ever given any information," Roy Bell with the Garden of Innocence said.

But on Saturday, they each found an identity and a home. William, Oliver, Maisie, Brenna, Anthony-Jon, Paisley, Eli and Arlen found themselves the center of attention, and the muses to poetry and music.

And as they each passed from one set of hands to the next, an entire community became their family. A crowd of hundreds came to honor the forgotten by laying them to rest in the Garden of Innocence, covered in flowers and care, instead of dumped in a pauper's plot.

"They matter, their lives mattered," Bell explained. "It mattered to every person today who touched one of these."

Four years since it opened, more than 80 children are now buried in the garden - each of them living on as human beings, blanketed by love and touched by grace.

Eight new children enter the Garden of Innocence. A somber ceremony this morning for abandoned children who died in Fresno County. @ABC30 pic.twitter.com/s1j0tf0oaX

Volunteers organize two Garden of Innocence ceremonies a year at Mountain View Cemetery - one in the fall and one in the spring.

If you want to donate or volunteer, the national organization's website is www.gardenofinnocence.org, and the local Garden of Innocence folks tells us you can email them at goifresno@gmail.com.
Related topics:
societycaliforniachild abandonedfuneralu.s. & world
Copyright © 2021 KFSN-TV. All Rights Reserved.
More Videos
From CNN Newsource affiliates
TOP STORIES