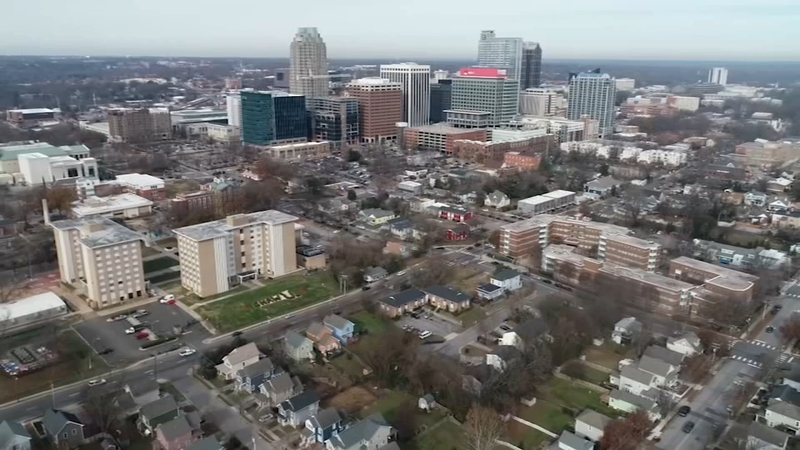 RALEIGH (WTVD) -- As Wake County continues to grow and change as a community, leaders from across the area gave residents an update Thursday on what's happening in Raleigh during the State of the City, County and Schools.

That growth has provided both opportunities and difficulties.

Over the last couple of years, the City of Raleigh and Wake County have had their eyes on big prizes.

They've made bids but have fallen short on attracting major projects like the new headquarters for Apple and Amazon.

"The one thing I heard a lot about was the airport," said Mayor Nancy McFarlane. "We love our airport, but it doesn't have as many direct flights as say an Atlanta or New York."

That is being addressed, in part, by a new runway.

Despite missing out on those developments McFarlane believes there is still momentum.

"When Amazon decided not to come, my thought was that kind of growth is going to come anyway, it's not just going to be all at once," she said. "So we really do need to prepare for that."

And, she said, there's already things to brag about.

"I think there's still a perception out there that we're not that big city that they want to be able to show off," McFarlane said. "But, we've also had people that came that really, really loved it here. And CEOs are people too, and loved the thought of raising a family here, and go back to their board and it's a split decision, but those things will come with time."

She noted the decreased unemployment and increased business expansion and relocation we've seen.

But with that, there comes a strain on transportation.

"It really is about offering as many alternatives as we can," McFarlane said. "Commuter rail, we've had talks about commuter rail even reaching out to other parts of the state."

Another issue is affordability.

New, higher-paying jobs, coupled with population increases, have led to increased land value. Now some people feel they're being priced out of their homes.

"Affordable housing is an increasingly alarming issue here in Wake County," said Wake County Board of Commissioners Vice Chair Greg Ford. "Again, it's supply-and-demand. As we have increasing demand for our existing housing units, the prices are being driven up."

In response, the Wake County Board of Commissioners created an Affordable Housing Department and Committee that's working to improve and retain the number of available affordable housing units.

And it's no surprise public education came up in the discussion.

One area Wake County is working to address is teacher compensation.

While part of that is set by state and federal budgets, education leaders are trying to stay competitive in the marketplace with a pay and benefits structure.

Another issue: a strain on resources.

A decade ago, the county had 1,072 trailers on campuses. Now, they have 1,019. That's despite a much larger tax base to pull from.

"But if we just wanted to remove all those temporary classrooms, those trailers, we would have to build 20 new schools. Now 20 schools is the number of schools in our 7-year plan," said Wake County Board of Education Chair Dr. Jim Martin.

"Now, beyond pay, what other profession do you know that you don't get to go to the bathroom when you need to during the day. Right? We're not giving (them) time to plan," he said. "We're saying, 'be engaged the whole time.' We can't guarantee a planning period. And so what does a teacher end up doing? Nights and weekends grading papers. So understanding the personnel structure that I'm talking about needs to be much bigger than just teacher pay. I've got to give you time. Time is one of the most valuable commodities for an educator, and frankly for anybody."
Report a correction or typo
Related topics:
societyraleighwake countymoneytransportationgovernmentpopulationaffordable housing
Copyright © 2021 WTVD-TV. All Rights Reserved.
TOP STORIES
3 dead, 2 missing as tubers go over dam near NC-VA border
Merging where the lane ends not 'jumping the line'; may become the law
2 dead, 2 injured in Durham shooting; activists say city needs to step up
Help name red wolf pups born at NC Zoo
Despite incentives, fewer North Carolinians vaccinated each week
Tropical Storm Claudette expected to form today
Sheriff IDs pilot killed when airplane crashes in Kinston
Show More
Triangle residents call Juneteenth a reminder to educate oneself
Spring Lake first municipality in Cumberland County to make Juneteenth official holiday
LATEST: Gov. Cooper urges more people to get vaccinated
Cary dad's Facebook group, Dads Married to Doctors, grows globally
Father gives daughter life-saving gift as living organ donor
More TOP STORIES News