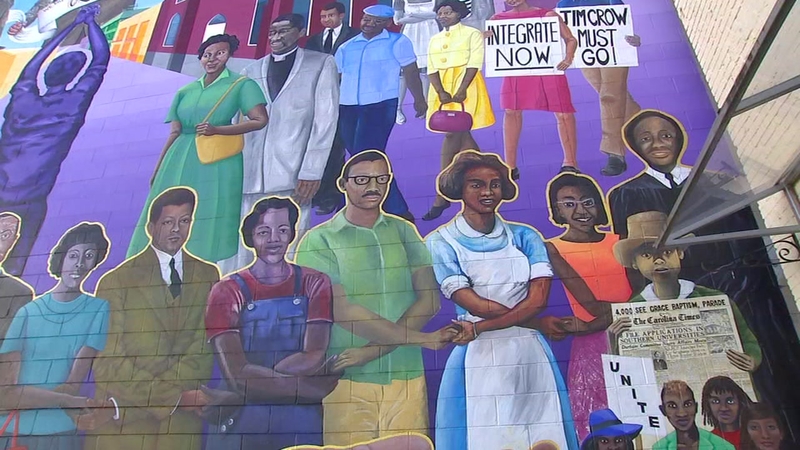 DURHAM, N.C. (WTVD) -- When you walk past 120 Morris Street in Durham, you'll see a massive mural that depicts key events and people involved in the civil rights movement.

The mural is especially relevant today as we approach the 55th anniversary of the Civil Rights Act.

Back in 1964, President Lyndon Johnson was aware of high emotions related to the struggle for equal rights in America when he signed the bill into law. He said, "Its purpose is not to divide, but to end divisions. Divisions that have lasted far too long."

"It was the first legislation that was enacted in modern day America designed to deal with the issue of Jim Crow in private establishments," Irving Joyner, a law professor at North Carolina Central University, said as ABC11 stood before the mural the other day. "This was a monumental step, for people to be able to live, stay in hotels, go to restaurants and eat where they had been denied on the basis of skin color prior to that time. In employment, in housing, a whole lot of areas where African Americans were discriminated against by people other than just the state."

The upper right-hand corner of the mural features logos of businesses where people sat down for social justice. One of those companies was the once-segregated Royal Ice Cream company in Durham.

"Right here," said Joyner. "Howard Johnson's.. another key part of that history of discrimination against African Americans during that time. There was a boycott, right here in Durham, where African Americans went in to let people know that this segregation was wrong.. that African Americans should be allowed to stay in that facility, and they won!"

Similar protests across the south finally led to action in Congress by 1964.

First, the House of Representatives passed the Civil Rights Act. Then, it moved to the Senate where it faced opposition from Southern lawmakers.

It arrived there 55 years ago this month, which was years after the famous sit-in that happened in Greensboro at a lunch counter in Woolworths in 1960.

That's when signs for "white" and "colored" separate facilities were common in North Carolina cities and towns.

"African American communities tried to emulate what African Americans were doing here in Durham, especially the Durham Committee on the Affairs of Black People," Joyner said.

The North Carolina Museum of History has a permanent exhibit with facts and artifacts about those days and activities.

Curator Earl Ijames met ABC11 there and described the activities of students who demonstrated because some adults couldn't risk losing their jobs or other reprisals from segregationists.

"Protesting, walking, hearing jeers from the Ku Klux Klan during the early Sixties, leading to the passage of the Civil Rights Act," said James.

It was signed by President Johnson, a son of the South who represented Texas in Congress before the assassination of John F. Kennedy put Johnson in the Oval Office.

"This Civil Rights Act is a challenge to all of us, to go to work in our communities and our states, in our homes and in our hearts, to eliminate the last vestiges of injustice in our beloved country," he said after signing it.

"It's critical, that African Americans know, that whites know, that everybody else knows what that history was all about, what the toll was, and what did it cost African Americans and whites that this degradation was in place," said Joyner. "Because a lot of the attitudes which prevailed during this Jim Crow era are still present today and we have to continue to fight against that, even now."
Report a correction or typo
Related topics:
societydurhamblack historyblack history monthcivil rights
Copyright © 2021 WTVD-TV. All Rights Reserved.
TOP STORIES
3 dead, 2 missing as tubers go over dam near NC-VA border
LATEST: Gov. Cooper urges more people to get vaccinated
UNC student body president slams his own university
Tropical Storm Claudette expected to form today
Charlotte lawmaker suggests fine for donating to homeless
Grandfather with Alzheimer's gives Navy-bound grandson's 1st salute
Restaurants begin dishing out 20 percent Living Wage Fee to customers
Show More
100-mile yard sale happening in central NC this weekend
US Mint to issue quarters honoring notable American women
2 dead, 2 injured in Durham shooting, police say
Pilot killed when airplane crashes in Kinston
Cheer squad criticized for excluding student with Down syndrome from team photo
More TOP STORIES News