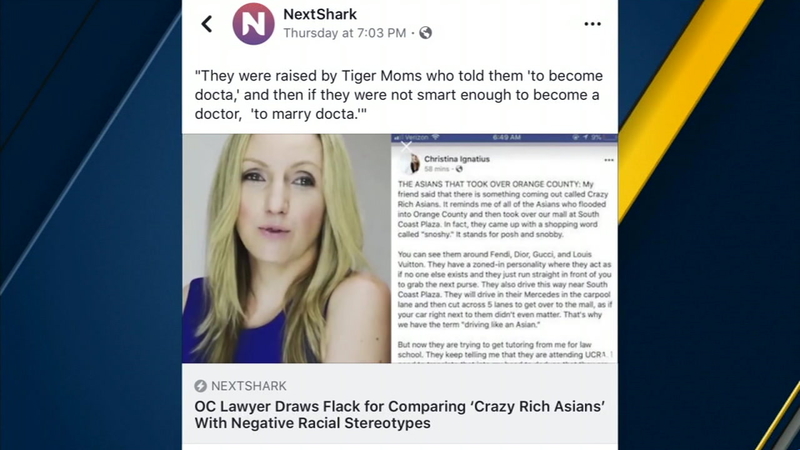 "She's in for a ride because we are not going to let this pass. We will not tolerate that kind of racism here in Orange County," Sylvia Kim said.

Kim is the Orange County director of Asian Americans Advancing Justice. The post was captured in a screenshot and went viral. It was shared numerous times from the Asian American news site nextshark.com

In the viral post, the law school tutor wrote about her students.

"They keep telling me they are attending UCRA. I need to translate that into my head to deduce they are going to UCLA," she said.

She also wrote about her former Asian classmates, again making fun of the way they spoke.

"They were raised by Tiger Moms who told them to 'become docta,' and then if they were not smart enough to become a doctor to 'marry docta,'" she said.

Ignatius closed with "from one annoying thing to another, welcome the Asians!"

"I think that putting us all under the same umbrella is what has led to things like the model-minority myth, the sense that one narrative fits all and that's absolutely not the case with our community," Kim said.

Ignatius did not respond to phone calls or messages for comment. But in a follow-up post, she called it a joke and that she had no idea talking about stereotypes would be so provocative.

Kim is not laughing and is now starting a petition for the state bar to take action.

"Open racism such as what was demonstrated in Christina's post actually demeans the legal profession as a whole," she said.