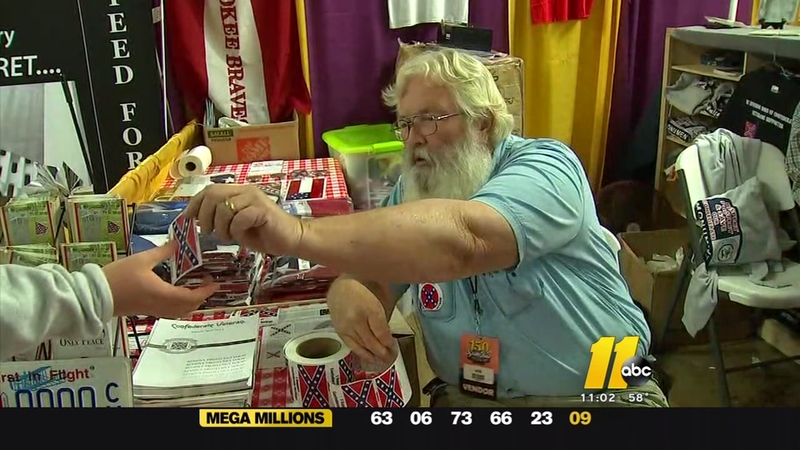 RALEIGH, North Carolina (WTVD) -- The Sons of Confederate Veterans say they've been handing out these Confederate battle flag stickers at the state fair for more than 25 years. But this year, as controversies about Confederate monuments and what the Confederacy means take center stage, complaints about the stickers have been coming in more frequently to fair officials.

"I would not wear this sticker. I would not stop at the booth," said Catina Jones, a Durham resident. "It represents hatred. I know they say it's heritage, but to me, it's hatred."

NEW AT 11: Did you get one of these at the NC State Fair. Many did... and the complaints are coming in. #abc11 pic.twitter.com/4OSy3GBdvV

Lamar Pender, one of the group's members who helps manage the booth says reaction has been overwhelmingly positive.

"(Reaction has been) very good, very good," he said.

He disagrees with the argument that the Confederacy's main goal was defending the enslavement of millions of African-Americans.

"(Confederate soldiers) were fighting for their home and country, their livelihood," Pender said.

But in the Confederate battle flag's more recent history, it's been used as a symbol by pro-segregationists and white supremacists.

"And we don't agree with that," Pender said. "We don't believe in their using one of our symbols for racism, as promoting racism, because we do not."

Nevertheless, after multiple complaints that the stickers and the message should be barred from this state-sanctioned event, Fair organizers are pledging to study the issue.

"You start to get into questions about First Amendment issues, and like I said, we want to take a look at it after the Fair," said Department of Agriculture spokesperson Brian Long.