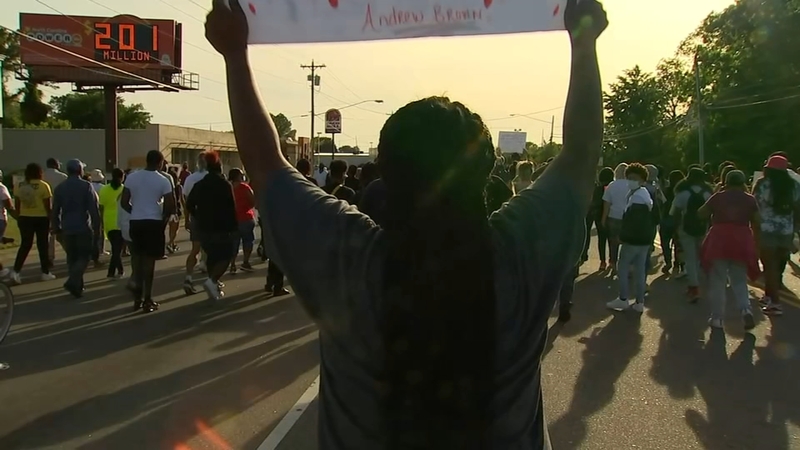 EMBED <>More Videos
ELIZABETH CITY, N.C. (WTVD) -- District Attorney Andrew Womble said Tuesday that the deputies who shot and killed Andrew Brown Jr. on April 21 were justified in their actions and would not face criminal charges.

"Mr. Brown's death, while tragic, was justified, because Mr. Brown's actions caused three deputies with the Pasquotank County Sheriff's Office to reasonably believe it was necessary to use deadly force to protect themselves and others," Womble said before showing the body camera video to the public for the first time.

Brown's family, who had already seen the video in question, previously said the video showed Brown, afraid for his life, backing away and then driving off in an attempt to escape being killed.

The deputies were at his home serving arrest and search warrants following an investigation that authorities said linked him with drug-related crimes. They learned of Brown's location and arrived there around 8:30 a.m. to arrest him.

The total time the deputies interacted with Brown--from the moment they jumped out of the truck to the moment they pulled Brown's body out of his crashed vehicle--was 44 seconds.

WARNING: The contents of this video may be disturbing.
EMBED More News Videos

WARNING: The contents of this video may be disturbing. Audio has been edited to remove language that some may find offensive.

The video shows the deputies jumping out of the back of their truck, running at Brown's vehicle, cursing and pointing guns at him.

Brown begins reversing his vehicle away from deputies and toward his home. Before reaching his home, Brown begins driving forward--toward the deputies who had surrounded his vehicle.

As Brown's car begins going forward, one deputy is forced to sidestep the vehicle to avoid being hit.

"Brown's precise speed in attempting to flee and striking deputy Lundsford is uncertain. But that he drove recklessly and endangered the officers, is not uncertain. Therefore I find that Brown's actions and conduct were indeed dangerous by the time of the shooting," Womble said.

A lot of the disagreement between family and the DA lies with Brown's intent during that short exchange with law enforcement. Brown's family and attorneys have said the video shows Brown backing away from and then turning away from the deputy in an effort to drive off.

"We were able to see Mr. Brown sitting in his vehicle -- that he was ambushed as the sheriff's office made their way to his residence," one attorney for the Brown family previously said. "Appearing to be surprised. At all times his hands were visible. At all times he did not appear to be a threat."

Womble says deputy Lundsford was struck twice by Brown's vehicle. Although he admits he has no evidence that Lundsford or any other deputy was injured during the incident.

"I cannot clarify whether there were any injuries sustained. I do not know that," Womble said.

District Attorney Andrew Womble said Tuesday that the deputies who shot and killed Andrew Brown Jr. on April 21 were justified in their actions.

Brown's car travels a short distance before crashing into a tree. The same deputies who shot him run to the crash site and remove his body from the vehicle.

Investigators did not find a weapon inside Brown's vehicle.

"I find that the facts of this case clearly illustrate that the officers who used deadly force on Andrew Brown Jr. did so reasonably and only when a violent felon used a deadly weapon to place their lives in danger," Womble said.

Womble went on to say that the law does not require the danger to law enforcement to be "actual." As long as the danger is "apparent," it can justify the use of force, although Womble said he believes the deputies faced both apparent and actual danger during their interaction with Brown.

"The constitution does not require police to gamble with their lives in the face of a serious threat of harm," Womble said.

Womble said the official autopsy has not be finalized, but preliminary results from the medical examiner's office showed Brown had suffered two gunshot wounds: one to the right shoulder and one to the back of the head. The cause of death appears to be multiple gunshot wounds.

The autopsy also found a substance consistent with crystal meth was found in Brown's mouth at the time of his death.

Autopsy PC, the company Brown's family hired to perform an independent autopsy, said Brown was shot four times in the right arm, and then once -- fatally -- in the back of the head.

SEE ALSO: How a close-knit community copes with being thrust into national spotlight with shooting death of Andrew Brown Jr.

Seven Pasquotank deputies involved in the episode were initially placed on administrative leave, but four of them were allowed to return to duty after it was determined they did not fire shots at Brown, officials said.

The three deputies who opened fire on Brown were identified by Pasquotank County Sheriff Tommy Wooten as Investigator Daniel Meads, Deputy Sheriff II Robert Morgan and Cpl. Aaron Lewellyn. Meads and Morgan have each been with the sheriff's office for more than five years, and Lewellyn has served over two years.

The sheriff's office said Morgan is Black, while Meads and Lewellyn are white.

Pasquotank County Sheriff Tommy S. Wooten II said in a video posted to Facebook on Tuesday that he reviewed the results of the FBI investigation, the body camera footage and the law in North Carolina and concluded that his deputies did not violate criminal law. However, he said, after a personnel review, he has decided that the three deputies involved will be disciplined and retrained.

They will keep their jobs, he said.

"This was a terrible and tragic outcome. And we could do better," Wooten said. "Every person in every job makes decisions. In law enforcement, we have a higher responsibility to do everything we can to make the best decision."

He noted the following mistakes that were made:


He also said he would ask the judge to allow him to release the video to the public as soon as possible.

"I want to say something to the family of Andrew Brown Jr.," Wooten said in the video. "This should not have happened this way at all. While the deputies did not break the law, we all wish things could have gone differently, much differently. I continue to pray for them and hope they will find peace."

Police records show investigators wanted to search the home to prove that Brown sold and was in possession of "crack" cocaine, methamphetamine and heroin. According to the warrants, detectives used an undercover informant to record audio and video of them purchasing "crack" cocaine and methamphetamine from Brown on numerous occasions.

The police shooting, described as an "execution" by Brown's family members, has drawn national attention to the small, majority Black city in the state's rural northeastern corner. Protesters and civil rights leaders have demanded full release of the video.

The ACLU of NC said in a statement on Tuesday that the DA's ruling is "a sign that the system is working as it was designed to."

"It should not come as a surprise that the criminal legal system has upheld the legitimacy of another police murder of a Black person," the statement said. "Communities deserve justice and accountability, but history shows justice for people of color is rare in a system that was built upon slavery and has been modified over time to control and limit the lives of those who are not white."

NC NAACP's Rev. Spearman says he will continue to march for justice.

Governor Roy Cooper on Tuesday doubled down on his recommendation for a special prosecutor to handle the case.

"Public confidence would have been better served with a special prosecutor and by quickly making public the incident footage," he said in a statement.

Attorney General Josh Stein said in a statement that he continues to support the full release of the body camera footage to the public.

"Andrew Brown Jr.'s family and many people in Elizabeth City and beyond continue to grieve, and I extend my deepest sympathy to them. I continue to believe it is critically important to release the full body camera footage to the public. The trust in our criminal justice system that is currently fractured will only be more difficult to repair without complete transparency. Now that the investigation has concluded, it is imperative that the court authorize the release of the full video to the public immediately."

Alkila Seymore, an Elizabeth City mother, was among those marching.

"I'm frustrated, there's got to be justice. We're not getting it so we're going to keep marching, said Seymore. "It's just heartbreaking because I never thought it would happen in my city and I have a son, 9 years old, asking me questions that I can't answer."

Satoria Johnson, another mother, is another Elizabeth City native who said she marched for a future community still growing up.

'Heartbreaking:' Elizabeth City mothers were among the demonstrators who marched after DA releases findings in Andrew Brown Jr. shooting case

Brown's son Jha'rod Ferebee said last week after viewing the body camera video that he thought the shooting never should have happened.

Attorneys for the family have released the following statement on Tuesday:

"Andrew Brown Jr., his grieving family, and this community deserve answers. And they received anything but from D.A. Womble's attempt to whitewash this unjustified killing. To say this shooting was justified, despite the known facts, is both an insult and a slap in the face to Andrew's family, the Elizabeth City community, and to rational people everywhere. Not only was the car moving away from officers, but four of them did not fire their weapons - clearly they did not feel that their lives were endangered. And the bottom line is that Andrew was killed by a shot to the back of the head. Interestingly, none of these issues were appropriately addressed in today's press conference.