Meet some of the faces of homelessness on Durham's streets 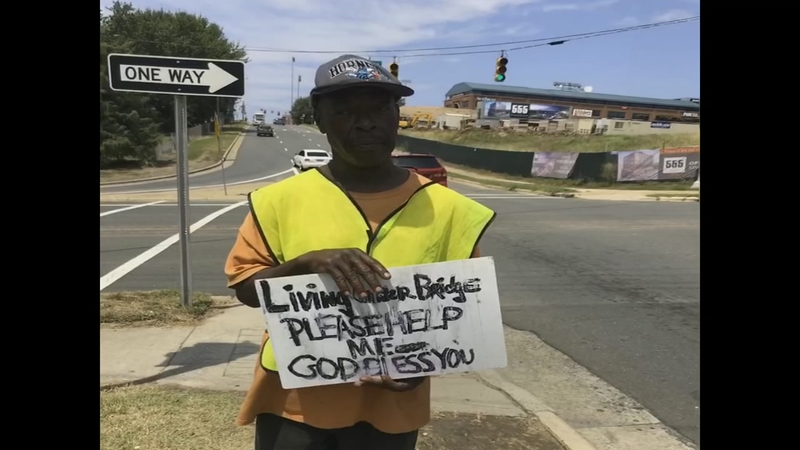 Putting names to the faces of the homeless

DURHAM, North Carolina (WTVD) -- It seems like just about everywhere I drive, I often pass a person standing on the street corner holding a sign asking for help.

On my way to work each day, I pass several all within a mile of our ABC11 Durham station. I decided to get out of my car and talk to the people behind the signs.

For several years, I've passed 57-year-old Tim Weaver standing at the off-ramp of 147 on Fayetteville Street. He's lost weight since I first started seeing him. He told me he's now homeless after his apartment burned down three and a half years ago.

Tim says he used to work in roofing, painting, and sheetrock, but now he is out of a job. He wasn't embarrassed when I asked to see his home; he walked me just a few feet away from where he stands all day and showed me where he lives under this bridge. He tells me two other homeless men share the area with him. They all have very old dirty mattresses they sleep on.

Tim says he makes about $20 a day so he can purchase batteries and candles to light his home. What Tim says he wants most is a job, any kind of work, so he can try to get off the streets.

David Goodman says he's been on the streets for three months. The former truck driver says he lost his license, his job, and his home.

"I've made some bad decisions in my life, and this is what it cost me," Goodman said. "It's hard being on the streets and having people look at you."

Goodman also was not afraid to show me where he lives, also under a bridge along Roxboro Street.

He added: "It's hard to keep up with hygiene because you can't take a shower."

He too just wants any type of job so that he can bounce back.

Vanetta Johnson, 43, has been on the streets for a year. She says she lost her job working at a thrift store. She is also living under a bridge along Roxboro Street while she waits on housing.

"It's very hard for me to come out and hold a sign," Vanetta admitted. No matter how difficult it is for Vanetta to stand on the side of the road, she always does it with a smile.

"How do you always keep smiling," I asked Vanetta. She responded, "I guess it's the Lord. You got to stay up, and you have to stay positive. He wakes me up every day no matter what position I'm in; I'm still going to be happy."

Vanetta says she does receive an abundance of hygiene products from people who drive by her, but what she says she really needs is socks and undergarments. She also shared that she loves Oodles of Noodles and would love to get more of those as well.

Living at the homeless shelter for a year, 60-year-old Ricky Harton asks for food, money, and clothes during the day. He wants people to know that he needs a job and that he's not doing this to get high.

Ricky said he would be good at any kind of construction job, and he hopes to one day make it off the streets.

Out of the four people that would talk to me, Ricky is the only one who says he sleeps at the homeless shelter at night. The other three people told me a variety of reasons why they don't.

They all told me they are making the best of the situation they are in and are thankful for anything that is given to them.
Report a correction or typo
Related topics:
societydurhamdurham countyhomelessdurham county news
Copyright © 2021 WTVD-TV. All Rights Reserved.
More Videos
From CNN Newsource affiliates
TOP STORIES