NC state-owned attractions rank among most popular for 2017 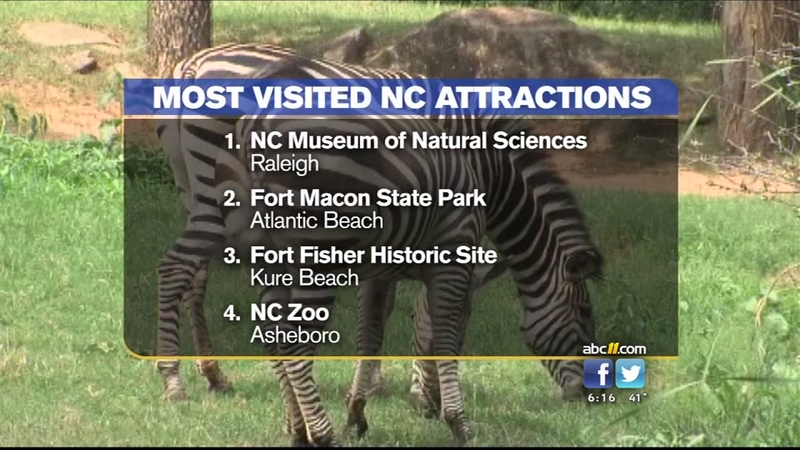 For the fourth year in a row, the North Carolina Museum of Natural Sciences in downtown Raleigh was the most visited attraction in the state with more than 946 thousand visits.

There are always plenty of things to do and see in North Carolina and now, new figures are backing that up.

North Carolina's state-owned attractions are ranked among the most visited in the state according to an annual survey of North Carolina museums and historic attractions just released by Carolina Publishing and Associates.

Four of the top five most-visited sites in 2017, and 15 of the 30 total sites in the annual ranking, are managed by the N.C. Department of Natural and Cultural Resources.

"I am delighted to see that our department's amazing resources continue to be among the most popular places for people to visit in North Carolina year after year," said Secretary Susi H. Hamilton. "Many of our sites achieved record visitation numbers in 2017. This achievement shows that nature, arts and history are important to our citizens and visitors to our state, and that they are also vital economic drivers for our local communities. I'm so proud of our outstanding staff for providing the exceptional programs and exhibits that keep visitors engaged and excited."

For the fourth year in a row, the North Carolina Museum of Natural Sciences in downtown Raleigh was the most visited attraction in the state. More than 946 thousand people visited in 2017.

Fort Macon State Park in Atlantic Beach was the second most visited attraction with 896, 682 visitors.

The Fort Fisher State Historic Site in Kure Beach ranked third with 871,676 visitors, and the North Carolina Zoo in Asheboro took the fourth spot with 860,148 visitors in 2017.

Other DNCR properties on the list, along with their visitation numbers for 2017, include: