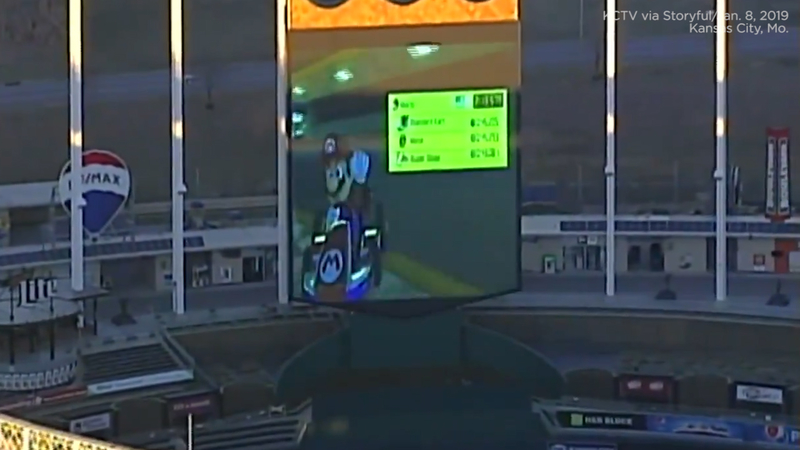 KANSAS CITY, Mo. -- Somebody in Kansas City just got to play the most epic game of Mario Kart: on the big screen of a major MLB stadium.

Local television station KCTV stumbled upon the game in progress at Kauffman Stadium, home of the Kansas City Royals, after sending their news helicopter to shoot unrelated aerial footage of nearby Arrowhead Stadium.

KCTV sports reporter Tom Martin tweeted video of the game, which was shared widely on social media and garnered nearly 2 million views in less than 24 hours.

we sent our helicopter out to get aerials of Arrowhead Stadium and on its way there it noticed a game of Mario Kart had broken out on the Crown Vision board at Kauffman Stadium?? 😂 pic.twitter.com/rOy0icieVi

Despite speculation on Twitter, the game wasn't played by a rogue employee -- it was an officially sanctioned fundraising event put on by the team's charitable foundation, Royals Charities. As the story spread, the foundation teased that local fans "may even see a video game party on CrownVision as an auction item in 2019."

This is a part of a @Royals Associates fundraiser with us to kick off the year! You may even see a video game party on CrownVision as an auction item in 2019 👀