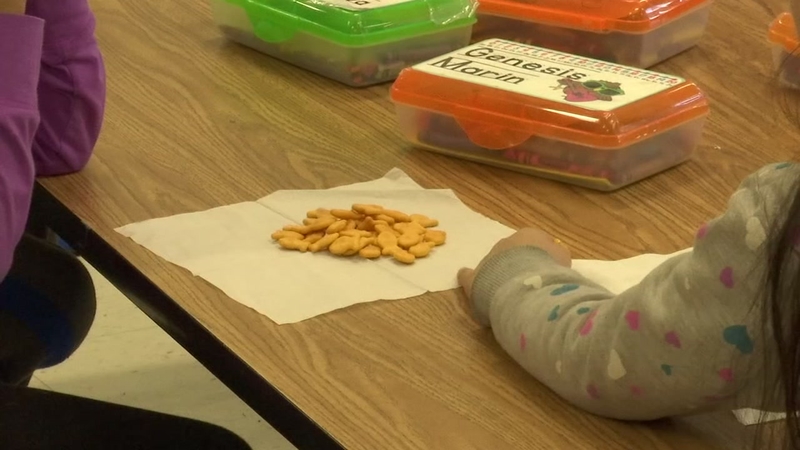 Group hopes to make sure kids have healthy snacks

"Snacks is a real pain point. It could be that some students bring in healthy snacks, some don't bring snacks at all. Some bring in junk food. So it creates a real problem for the teachers," said Michael Fern, the creator of KidBrightUSA.

The organization started following a conversation Fern had with a friend who is a teacher in Chapel Hill. The teacher remarked that he would keep snacks in his drawer to hand out to hungry students during the day. When Fern began to ask other teachers, he found the situation was more commonplace.

"I was shocked when I discovered this," Fern explained, as he shared anecdotes from several teachers.

"When students walk through the doors, they become our responsibility, they become our children. So our teachers are there looking at whether students have clothing, whether they have their snack, and if not they are filling the need themselves," Tate said.

KidBrightUSA consults with a pediatric nutritionist to curate a snack order form for teachers to check off every Friday. Volunteers and donors then receive the forms and pick up the requested items before dropping them off at the respective schools the following Tuesday. Fern said they work on this schedule so they can provide fresh produce to students, as well as minimize waste.

Josephine Arguelles, the parent of a Hope Valley first grader, picks up items and is trying to recruit other parents to assist in the initiative.

"I wanted my children to see that you can do something small like picking up a few extra things at Costco and delivering them, and you can have an impact on someone else's life," said Arguelles.

Due to the size of Hope Valley, some students eat lunch as early as 10:30, creating a large gap until the end of the school day at 3:00.

"Having that nourishment to keep them focused again that takes into account the whole child. We think of schools, we only think of academics. But our motto here at Hope Valley is every child, every day. We're looking at every aspect of the child," said Tate.

Snacks cost 17 cents per child, which equals out to about $30 per child per school year. At this point, three Durham Public Schools - Hope Valley Elementary, Forest View Elementary, and Shepard Middle School - participate. In total, that's 24 classrooms, equaling about $500 in weekly food costs.

Fern says they target schools that have at least 60 percent free or reduced meals and are hoping to expand to other public schools in the district. They have also received interest from districts both inside and outside the state.

"We did some research and learned that growing children need four or five meals a day, and while they're great programs out there - there's free breakfast or reduced breakfast and free or reduced lunch, it turns out that snack is a major gap for a lot of students and families," said Fern.

The program currently serves kindergarten and first-grade students at Hope Valley; Tate is hopeful that fundraising efforts in conjunction with Giving Tuesday can help grow the program to include second graders at the school.

"It also takes away the stigma of students looking around, noticing who has a snack, who doesn't have a snack, who has a snack that's different from theirs. All students get a nutritious snack. It's the same snack they get to choose from each day, so no student needs to feel ashamed," Tate sad.