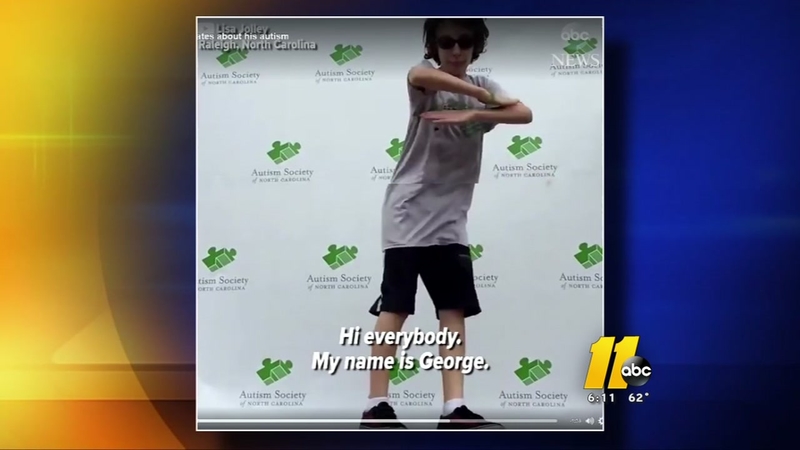 RALEIGH, North Carolina (WTVD) -- Like most 9-year-olds, George Yionoulis likes to cut up in front of the camera.

But unlike his classmates, the Douglas Elementary fourth grader is living with autism.

So when it came to a class assignment, he decided to open up about his disability with a video, explaining how it impacts him the most.


"I didn't speak until I was almost 3 years old. In fact, my parents weren't sure if I would ever speak at all," said Yionoulis. "I also tend to take what people say literally. That means if you say take a seat, you might find one less chair in your classroom."

He also reassures others, "I'm a kid just like you."

"Just because I behave in some kind of weird ways doesn't mean I'm way too different from the whole school, and I know it's OK to be different," he said.

Like most 9-year-olds, George Yionoulis likes to cut up in front of the camera.

Lisa Jolley hoped the video would help George's classmates better understand her son, but she never thought it would go viral after sharing the project on YouTube.

"The audience was not meant to be a million people. The audience was 21 fourth-graders so they can see when he's waiting in line, he can't stand still. When we're at recess, he does this," she said.

The video has now been shared hundreds of thousands of times with people around the world.

As for the attention George is getting, "I love it!" he smiled.

He said he wants his friends not to be afraid to ask him about his condition, because knowledge is power.

"Why not say, OK, here's the deal. I have this thing, and this is why sometimes I don't behave the way you do. Does anyone have any questions?" said Jolley. We are very proud of this boy."
Report a correction or typo
Related topics:
societyraleighwake countyautismeducationspecial needs childrenviral videocool kids
Copyright © 2021 WTVD-TV. All Rights Reserved.
TOP STORIES
Fayetteville business gets a ton of support after LGBTQ flag stolen
Old JCPenney store in North Hills undergoing a transformation
Health officials urge COVID-19 vaccinations as Delta variant spreads in US
Carl Nassib comes out as 1st openly gay active NFL player
Single home run propels NC State past Vanderbilt 1-0 in CWS
WEATHER: Hot, humid day with feels-like temps up to 103
Heading back to the office? Experts have tips for anxious pets
Show More
Bladen County political consultant pleads guilty to charges
Wake County couple transforms lives through foster care, adoption
Group calling for NC to investigate Postmaster General Louis DeJoy
Here's what's in the North Carolina Senate budget proposal
Surviving combat to die at home: Soldier picking out his coffin at 35
More TOP STORIES News