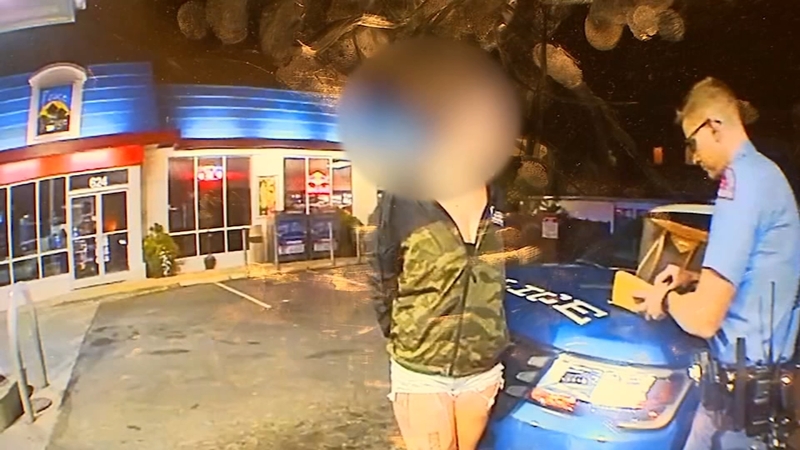 RALEIGH, N.C. (WTVD) -- The Raleigh Police Chief is defending an officer at the center of a controversial traffic stop back in September.

"He did what he was trained and we trained him how to do it," said Chief Cassandra Deck-Brown.

The attorney for the woman seen in the body camera footage is calling into question the officer's tactics.

She says her client was "violated" by the officer.

The stop happened in late September at a gas station in downtown Raleigh.

Police say the woman in the video had hit two curbs and they pulled her over under the suspicion she was under the influence.

Karen Griffin, the woman's attorney, said an "officer should do a pat-down of that person to ensure that they do not have weapons and that there's no contraband on their person."

"My client was never accused of having any contraband on her such as weapons or drugs," Griffin said. "The officers had already searched the entire contents of her purse, they searched her vehicle. There was no reason he should have felt her buttocks like he did, her breasts or underneath her legs: the video shows he touched her underneath her legs."

Tonight @raleighpolice is defending her officer's actions during a September traffic stop that we now have officer body camera of. The woman's attorney says she was "disturbed" by the video. #ABC11 pic.twitter.com/fTn7RI4Znc

Griffin said she filed an internal affairs complaint after hearing that officer seen in the stop was still on the streets.

"This is about my client and others and how inappropriate this was and that it needs to be addressed."
Chief Deck-Brown on Wednesday called the search "valid" and "professional," noting that searches like this can be invasive.

"The comments from the local attorney I think were egregious, I think they were erroneous and I think they were unprofessional," Deck-Brown said. "We know there are incidents that do arise that create conflict and safety is paramount for all of us."

The District Attorney said she reviewed the video and for now doesn't believe anything in it rises to something criminal.

"I would hope RPD would review their training practices and when possible, provide a female officer."

There was a female officer at the scene and Griffin has questioned why she didn't do the search.