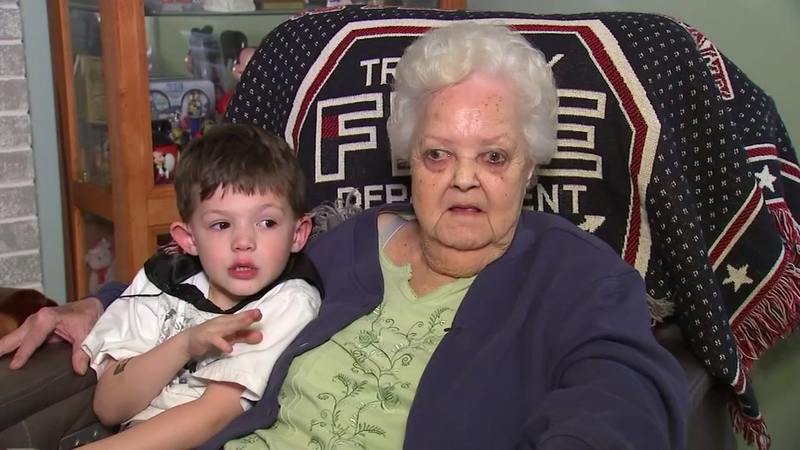 Boy plays hero to save great-grandmother having stroke

SANFORD, N.C. (WTVD) -- A Lee County 5-year-old is being hailed as a hero after helping to save his great-grandmother as she was having a massive stroke.

Sgt. Ken Gilstrap is usually the one protecting and serving with the Lee County Sheriff's Office, but when he couldn't get to his 82-year-old grandmother, Annie Ruth Carter, his 5-year-old son Dylan came to the rescue.

"I was on the couch looking right at her and when she started to fall, I tried to catch her but it was too late. When I got up she was on the floor already," Dylan said.

His great-grandmother who watches him after school was having a stroke.

"I only got the rag and fixed the phone ... and Nanny called," said Dylan pointing at his great-grandmother.

82 year old Annie Ruth Carter is alive today thanks to her 5 year old great grandson Dylan. All new at 4:30 I’ll show you how he saved her life. #abc11 pic.twitter.com/TRvuFR4TUu

Carter then called Dylan's dad who immediately called 911. Rescue was there within minutes but help was there the entire time.

"They were taking care of each other, and she had the start of a stroke and he was there to take care of her and help keep her calm," Sgt. Gilstrap said.

These days, "Nanny" is fully recovered but that's all thanks to Dylan, too. When he's not playing superhero, he's quite the physical therapist.

"And I also helped her do her arm muscles," Dylan told ABC11.

So while Dylan has a few years to figure out this thing called life, the passion for saving lives runs in the family.

And at 5 years old, he already has the superhero part down. For that, Annie Ruth Carter is grateful.