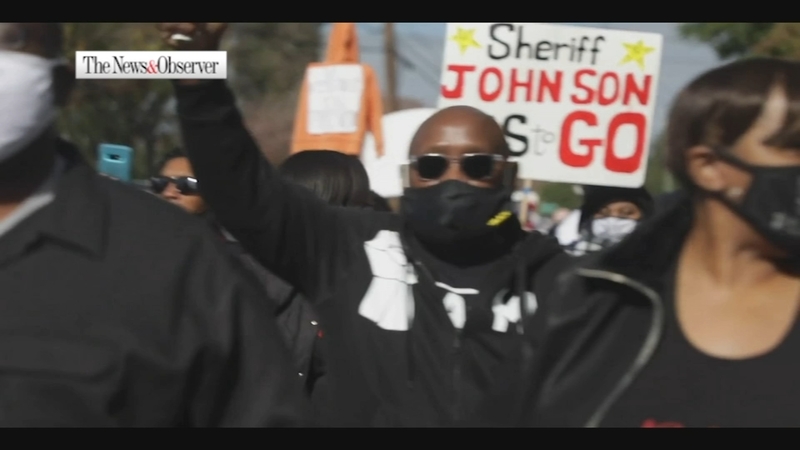 GRAHAM, N.C. (WTVD) -- Images of Graham, with law enforcement officers arresting demonstrators in the shadow of a Confederate monument, made headlines last summer.

Now our newsgathering partners at the News&Observer have created a documentary that highlights the fight for justice in the small town and digs deeper into the history of racial tension in Alamance County, called Sound of Judgment.

"We decided to pursue this because a lot had been written about Black Lives Matter in bigger cities, but not so much in small towns. And I noticed there were protests happening, or trying to happen, in Graham," said Investigative Reporter Carli Brousseau.
"It's hard to fully convey what it can be like at some of these protests in words," Visual Journalist Julia Wall said. "And video of instances that happened, interpersonally or between agencies and citizens, are far more impactful in words paired with video. So it was important for us to be there to tell what happened, but also show."

"A scene in which you witness a march to the polls that happened on the last day of early voting in North Carolina, in which there was a lot of force used by the Graham Police Department and the Alamance County Sheriff's Department," Wall said. "It's a disturbing scene to watch, and it affected a lot of the people we had been reporting on, building relationships with at the time."

"We really spent a lot of time getting to know people, and that we really are able to bring you into different perspectives as it relates to this national movement and the experience in small town America," Brousseau said. "We heard a lot from local Black Lives Matter activists, we heard a lot from a confederate activists, and we also spoke with Sheriff Terry Johnson. He has been fairly quiet on this subject so far. This is the first time he's really speaking to it directly, with reporters."

You'll also see people on both sides talk quietly and candidly about their beliefs and motivations.