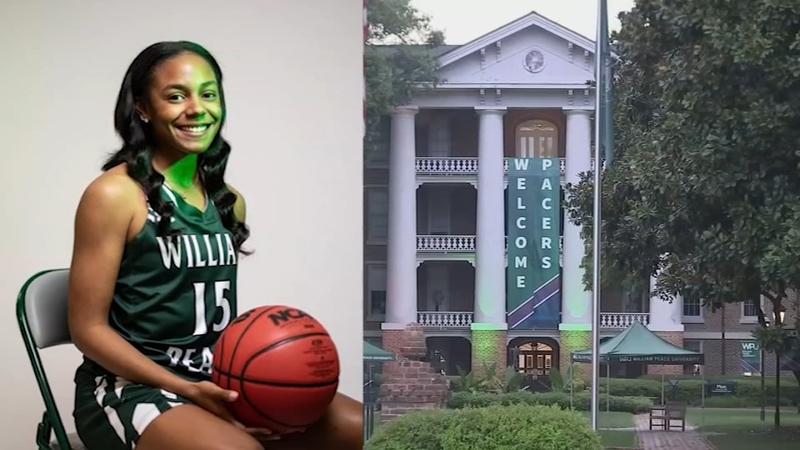 RALEIGH, N.C. (WTVD) -- Disturbing claims of racism on the court led to the William Peace University Women's Basketball Team walking out on their shot at the conference title.

The team did it in an act of solidarity with Lauryn Cross -- a star point guard.

It started back in January when, during a heated matchup against Mary Baldwin University, she says a white player insulted her.

"Basically she had called me a N*****. And then she had walked to the ref and told him 'can you please watch number 15. You know how they get.' Referring to the color of my skin."

"She said what N******. And my reaction was I punched her. I have apologized for my actions. I was just very, very upset. I've never been called a N**** bravely to my face."

Cross was suspended for four games.

Then, last week, during a game against Meredith College, she says a white player called her the N-word. There was no physical fight, but Cross says she was suspended for her behavior after the game, based on allegations that she was aggressive toward the player. (NOTE: After this story was published, Cross clarified that the use of the N-word during this game was directed at her teammates, not necessarily herself.)

"Meredith had reported that I followed them. I went into their locker room. It's a lot of little things that did not happen," she said.

Meredith College and its athletic department said it takes accusations of racism seriously, and were not aware of the situation until Cross' concerns surfaced publicly.

"The Meredith College basketball team and the College's athletics program take accusations of racism, on the court or off, very seriously. This summer, our program made a public statement against racial injustice, and we have vowed that our program would be a shining example of what diversity and acceptance should look like on campus and throughout our country.

As our statement from the summer makes clear, our program has a responsibility to stand up against hatred, intolerance, and racism. As a team we stand in solidarity with the Black community. Our diversity is what makes us great.

Meredith's basketball team and Avenging Angels athletics continues to stand against hatred and injustice as we support our student athletes and their wider communities."

The William Peace University Women's basketball team will not be participating in the championship game against North Carolina Wesleyan. This season has been like none others and has taught each of us the importance of family, unity, and how to handle adversity. Before anything else we are women, most of us being women of color. Our Women's Basketball program will not tolerate racism or represent those that do. During this season, a member of this team was a victim of being called a racial slur and other derogatory names during a game. She reacted in a way that the USA South conference nor William Peace University supported. Despite the understanding of our conference, our university proceeded to take further action against this player. Since this
occurred, there have been numerous incidents when a WPU women's basketball player has yet again been the victim of racial and derogatory names; and it has led to the unethical suspension of the same player.
Within this process, we feel as though we are not protected by our university and that our voices are not being heard. This situation is much
bigger than basketball. The systemic racism that our team has first hand experienced in the past several weeks is an issue that needs to be addressed not
only within William Peace University but in the USA South conference as a whole. Congratulations to the North Wesleyan Women's Basketball Team on their historic season and well deserved championship! Looking forward to competing against you all next season.

The university also said it reported Cross' concerns to the academic institution so they could also address the matter and is asking the USA South Athletic Conference to form an anti-racism taskforce.

"We are taking steps to ensure that our student athletes are no longer forced to navigate such inappropriate situations," the statement said, in part.

"Calling each others N***** and B****** we don't need that to play the game of basketball. That's not what we're here for and I want people to know It's not ok if you're playing basketball, walking down the street, you're at the grocery store... any of that," said Cross.

She says she still doesn't feel fully supported by the university regarding what happened to her. She wants to be a voice for other Black athletes who deal with similar racist incidents like this.

ABC11 reached out to Mary Baldwin University for comment but has not heard back.
Report a correction or typo
Related topics:
societyncraleigheducationracismcollegebasketball
Copyright © 2021 WTVD-TV. All Rights Reserved.
More Videos
From CNN Newsource affiliates
TOP STORIES