WTVD
PITTSBORO, North Carolina (WTVD) -- Friends, teammates, and opponents came together Thursday night for football and to help a player missing from the lineup.

A week ago, 14-year-old Orange High School junior varsity football player Thys Oldenburg took a hard hit and ended up in the hospital. His aunt said he is still in critical condition, fighting for his life.

One week later, his team played Northwood High School in Pittsboro and the schools decided to use the game to raise money for his medical bills.

Lifting Thys up in prayer, his team and Northwoods gather in prayer after game https://t.co/bylkajlXkn #ABC11 pic.twitter.com/DX2d0dmOU9

"It has praying hands on it and number 22 underneath it, because the main thing he needs now is prayer," said Robyn Allgood, a mother with a son on Northwood's team.

Her son is recovering from a concussion he got the same night Oldenburg was hurt. Allgood said her son will miss three games.

"It's scary, you really rethink the idea, is this a good idea, but I mean they can get hurt doing anything," Allgood said, and she noted her daughter got a concussion playing softball.

Oldenburg's family was not at the game but said they appreciate the two teams coming together to help.

The towels sold out and raised more than $300. Eric Yarbrough, principal of Orange High School said 400 to 500 bracelets were sold. 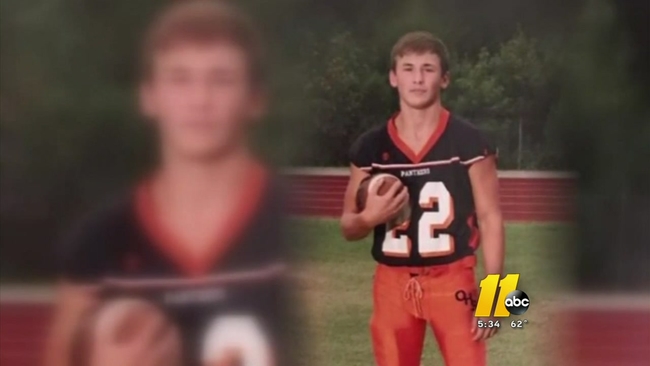