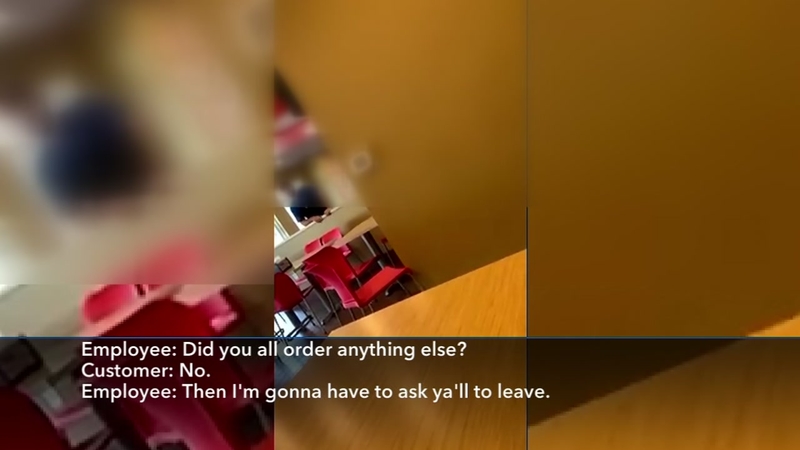 CLAYTON, N.C. (WTVD) -- Cellphone video of Domino's employees telling a group of teenagers to leave the Johnston County restaurant is going viral after the teen's mother posted it to Facebook.

Kni'yah Harris-Nickens, 15, of Johnston County, said it was the second time this month she and her friends were told to leave the establishment in Clayton's Riverwood community after paying for food.

Harris-Nickens said she ordered the 16-piece Parmesan bites and after sharing them with her two friends, an employee told them to leave.

In the video that Harris-Nickens recorded on her cellphone, you can see and hear an employee reference the "no loitering" policy and telling the two other teenagers who didn't order anything, they had to go.

Earlier this month, Harris-Nickens said the same employee told her and two other friends they had to leave after each of them had already paid for food.

"I feel like, I mean it's racist," she said. "The first time he did it there was two Caucasians that came in. They ordered pasta and Sprite and they sat down in there and then that's when he asked us three ladies to get up and we had more than what they ordered."

Harris-Nickens' mother, Ticca Harris, said she didn't think much of the first incident.

"It kind of sounded a little bit weird to me that they were asked to leave," she said. "But the second time was the one that actually hit the nerve. Because when I went to go pick my child up, she had showed me the video and it was very disgusting."

Harris posted the video to Facebook, filed a complaint with Domino's, and said she got a call from the chain's district manager the next day, explaining the franchise's no loitering policy.

"Because of unruly children coming into their store damaging property, coming in charging their phones, not buying anything," Harris said the district manager told her.

Her daughter said two of her friends, who were banned from the store for damaging property several months ago, went with her to the store last week, but waited outside the whole time.

"The local franchisee had a 'no loitering' policy at this store, based on previous problems with groups of teenagers causing issues for other customers and store staff in the past."
--Jenny Fouracre, Domino's Public Relations Director

Harris said her daughter was not causing problems and in each incident, she paid for food she should have been able to enjoy herself, or share, inside the restaurant.

"If I'm coming in there and I'm giving you money for something that I'm about to eat, I'm about to share, you shouldn't tell somebody that they need to leave," Harris said. "You need to change your dining policy."

A statement from Domino's/GBR Pizza, Inc sent to ABC11 read:

There is a "no loitering" sign posted at the front door. This store is in a largely residential area and has experienced numerous problems with groups of unaccompanied teens sitting in the store for extended periods of time and loitering on the sidewalk and parking lot near the entrance. This has impacted the business and its customers.

The store employees have been instructed to ask those who had been sitting in the store for long periods of time to leave. We have no knowledge of Ms. Harris' daughter having been asked to leave on a prior occasion. As you can see from the video posted by Ms. Harris, the employees were not loud or confrontational. They simply asked the unaccompanied teens to leave, as they have others on many occasions."
Report a correction or typo
Related topics:
societyclaytonjohnston countyviral videoracismcellphonepizzarestaurant
Copyright © 2021 WTVD-TV. All Rights Reserved.
VIRAL VIDEO
TikTok trend, dry scooping, could land you in the hospital
NC principal sings 'I Will Always Love You' to students at graduation
Video: Teen fends off bear attacking family dogs in CA backyard
13-year-old girl hospitalized in ICU after TikTok fire challenge attempt
TOP STORIES
3 dead, 2 missing as tubers go over dam near NC-VA border
Tropical Storm Claudette expected to form today
2 dead, 2 injured in Durham shooting, police say
Pilot killed when airplane crashes in Kinston
LATEST: COVID vaccine lottery updated scheduled for 11 a.m.
Raleigh names Patterson as new police chief
Black real estate developer breaks ground on SE Raleigh business hub
Show More
NCBOE approves documents for controversial social studies standards
Restaurants begin dishing out 20 percent Living Wage Fee to customers
DOD issues rule on Stayskal Act, will pay claims of medical malpractice
Fort Bragg soldier killed, 2 others injured in traffic accident
Man duped into buying Jeep that had 100k more miles than advertised
More TOP STORIES News