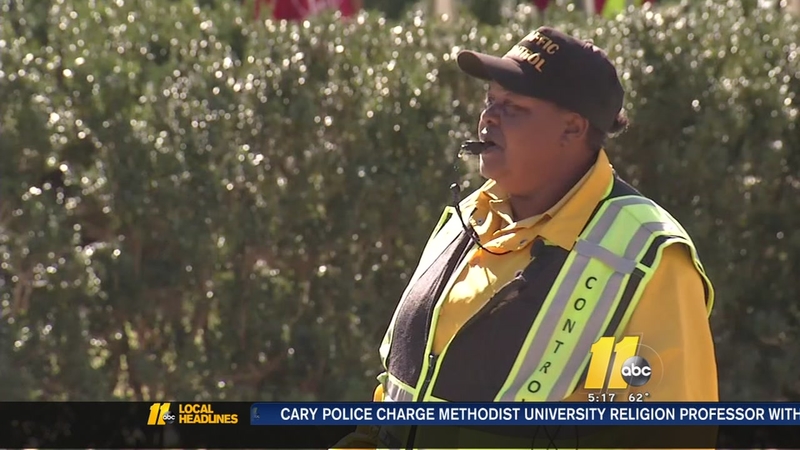 CHAPEL HILL (WTVD) -- A well-known and beloved crossing guard at the University of North Carolina at Chapel Hill is getting a big surprise after a post on Facebook has led the campus community to show how much they care.

Students raised more than $3,000 overnight so she can take a trip to see her son, who she hasn't seen in years.

Joann, who asked ABC11 not to use her last name, is a regular fixture on South Road at UNC.

When she isn't conducting cars and letting foot traffic flow, she works at a local dollar store, staying busy seven days a week.

The campaign to reunite the crossing guard with her son got started when one student stopped and asked for her story for the "Humans of UNC" Facebook page, that's when another student set up a GoFundMe to realize her dream.

"I have received amazing gifts from students, staff, bus drivers, just people that come through on a regular basis, but something like this ... I never would've dreamed of," Joann said.

"The last time I saw him was three years ago, at one of his uncle's funeral," she said. "Right after that, he left to Arizona, and I mean we stay in touch; I talk to him all the time, but as far as seeing him, I haven't seen him in three years."

"When you see her, you recognize her - 'Oh, the crossing guard lady," but like no one really knows who she is," Bhairavi Rajasekar said, explaining why she created the post on the "Humans of UNC" page.

"There was maybe 400 likes," Carlos Salas said, explaining why he then created the GoFundMe. "Some people were commenting all sorts of nice things about her, and the first thought that came to my mind was you know, well she has a dream that she expressed - what if these people who were saying such nice things about her came together and actually helped her out?"

Within in minutes of the GoFundMe going up, students came together and surpassed the $700 goal.

The students are now looking out for her, the way she's looked out for them for years.