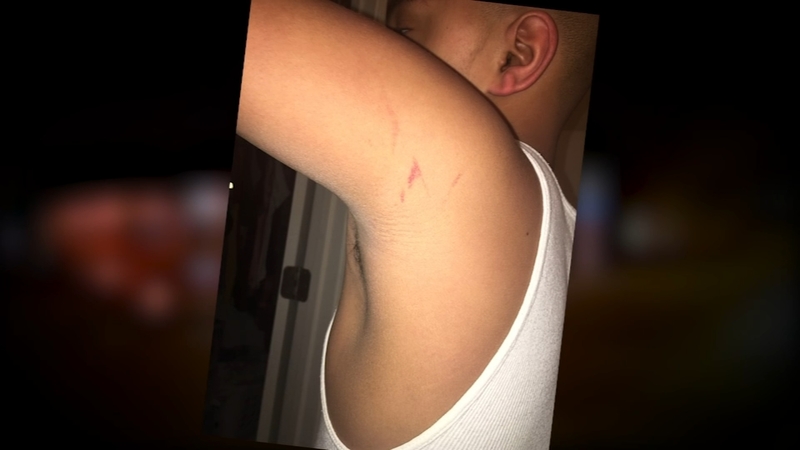 GARNER, N.C. (WTVD) -- An investigation is underway at East Garner Middle School into a mother's claim that her son's special education teacher assaulted him.

The incident happened last Wednesday in the school's pick-up/drop-off circle. Ryan Barner, a 12-year old boy with special needs came home with bruises and scratches that his mother, Renee Pickett, says he suffered at the hands of his teacher.

Pickett said the whole thing was caught on the school surveillance camera. And when she saw that tape today - she says she was even more disturbed.

"I feel like it's assault, " Pickett said. "Like why are you putting your hands on him? Because what I saw from the video, (Ryan) didn't do anything."

In a meeting Monday with the East Garner MS principal, Pickett was finally allowed to see the surveillance footage of the alleged assault on her son by his special education teacher.

"(The teacher) grabbed him and she kind of pushed him down to the wall in the corner because she had him going down like this," Pickett described. "And (Ryan) is just going down. (The teacher's force) left scratches and bruises on his shoulder and his arm."

Ryan was born with a genetic syndrome that left a small part of his brain undeveloped. Along with cognitive delays, his doctors recently told Pickett that Ryan is on the autism spectrum.

Last Wednesday - after what was described to his mother as a bad day behavior-wise at school -- Ryan was loaded onto the special transport van that takes him home each day. Pickett said his teacher came out of the building to stop him from leaving. She said the van's driver told her the teacher was clearly upset and angry.

"The teacher, she grabbed me," Ryan said about the incident. The boy said the teacher hurt him, leaving him "scared and sad."

"He's not safe with her as a teacher because a special education teacher would never do that," Pickett said.