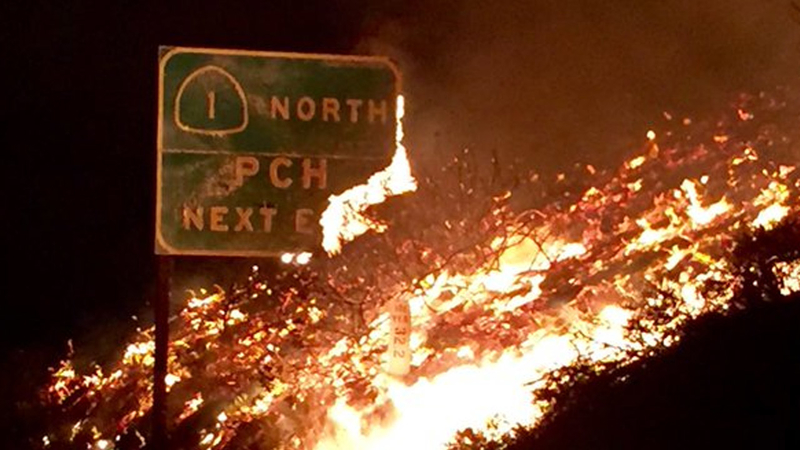 VENTURA, Calif. -- A brush fire has burned 1,200 acres in Solimar Beach near Ventura, Calif. prompting mandatory evacuations and closing the 101 Freeway in both directions Saturday morning.

The fast-moving blaze scorched hillsides near the beach and poses a threat to oil, gas, power and railroads.

The fire started around 10:30 p.m. Friday, burning about 100 acres in the 3000 block of West Pacific Coast Highway. According to Ventura County Fire officials, the flames were visible about 150 feet from the sand.

More than 600 firefighters from various agencies, including Los Angeles County Fire Department and CalFire, worked to quell the flames along with help from helicopter water drops. The Orange County Fire Authority sent over a Type 3 Strike Team, consisting of five brush engines with 19 firefighters. There was no information on containment.

Residents living in Faria Beach were placed under voluntary evacuations. The Red Cross set up a shelter in Carpinteria at the Veteran's Memorial Building, 941 Walnut Avenue.

The 101 Freeway was shut down in both directions - northbound at State Route 33 and southbound at Bates Road. Ojai residents were advised to use caution while traveling or cycling near Highway 150 between Oak View and Carpinteria due to heavy traffic caused by the closures.


Those driving in the area were asked to use Highway 150 as an alternative route.