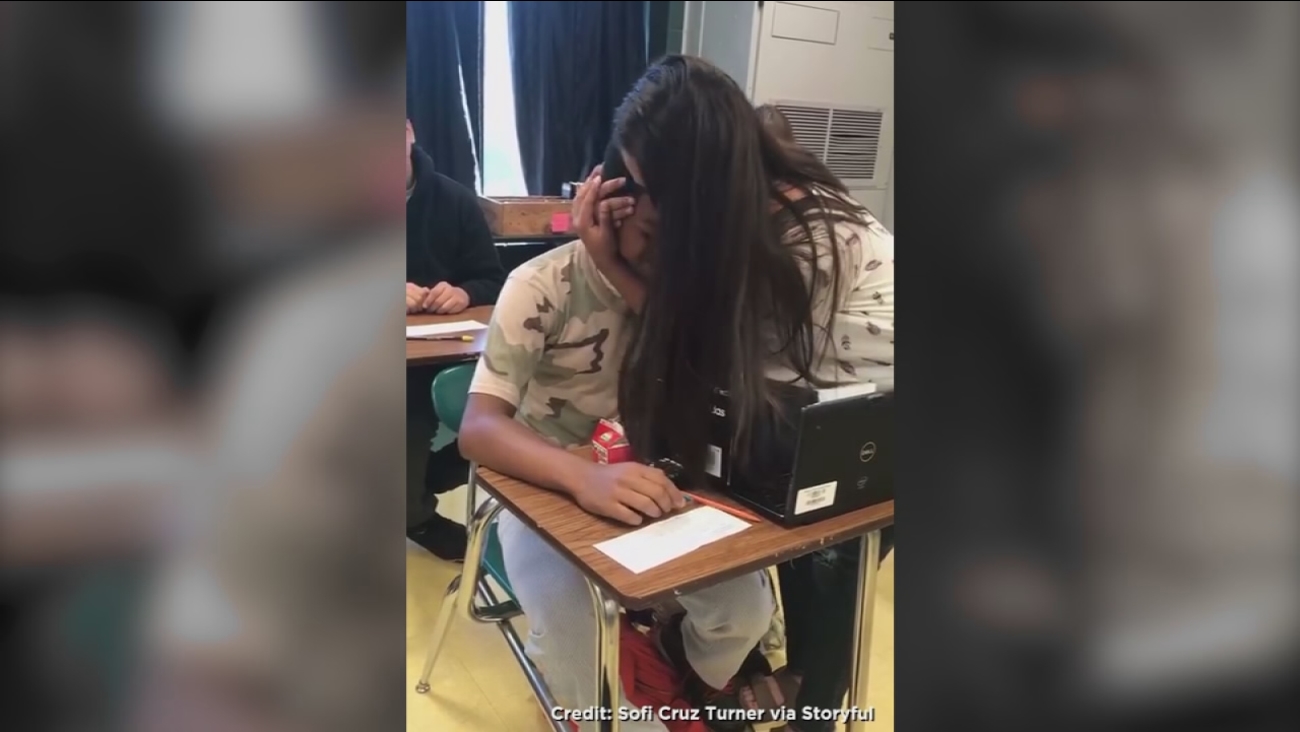 A South Carolina teenager reacted with tears when his long-time classmate and friend gave him a new pair of shoes and other items. (KFSN)

A South Carolina teenager reacted with tears when his long-time classmate and friend, Sofi Cruz Turner, gave him a new pair of shoes and other items as a gesture of appreciation for his years of friendship.

This video shows the moment Sofi gave the new shoes, shirts, socks and a backpack to Jahiem during class and Jahiem's emotional response.

"The past week and a half, I have been planning on doing something special for a good friend of mine. His name is Jahiem. I have known Jahiem since the third grade in Mrs. Dragotta's class. He has always been that one student where he does all of his work when due, never misses school, always helping the teacher out with stuff in class, and always being a happy human being."

The previous week, Jahiem had asked if someone could buy him a new pair of shoes, while not wanting "to sound in need," Sofi said. She wrote that she had always wanted to get Jahiem a gift, but either didn't have "the money or the gut to do it." However, she said that after getting a job and saving money, she decided to buy him shoes the next day.

"When giving him his stuff and watching him open his bag, all my emotions were coming out," Sofi continued. "Seeing him crying was very emotional because I could see that he-- didn't know what to think. I am so thankful to know that giving Jahiem those shoes made him so happy and allowing me to realize that giving someone something so special can be life-changing."
Report a correction or typo
Related topics:
societysouth carolinaviral videou.s. & worldgood news
GOOD NEWS
Entrepreneurial Fayetteville sisters honored with Key to the City
A motorcycle's unforgettable ride back home
Raleigh Irish dance academy wins big at world championships
Cumberland County mom on mission to help other moms with infant needs
TOP STORIES
Timeline breaks down Uvalde shooter's movements day of massacre
In video, 'angry' NC Gov. Cooper pushes for stronger gun laws
TX school shooting leaves at least 19 children, 2 adults dead
Columbine survivor reacts to Texas elementary school shooting.
Person County Habitat for Humanity looking for volunteers
Should you talk to young kids about mass shootings? And how?
NC schools use tool made after Sandy Hook shooting to protect students
Show More
Former Capital Cities/ABC Chairman and CEO Tom Murphy dies at 96
NC Medicaid expansion closer to reality as Senate leader shows support
Wake County moms demand change after Texas elementary school shooting
George Floyd's family continues to advocate for change 2 years later
NC Republicans seek to pass 'Parents' Bill of Rights'
More TOP STORIES News