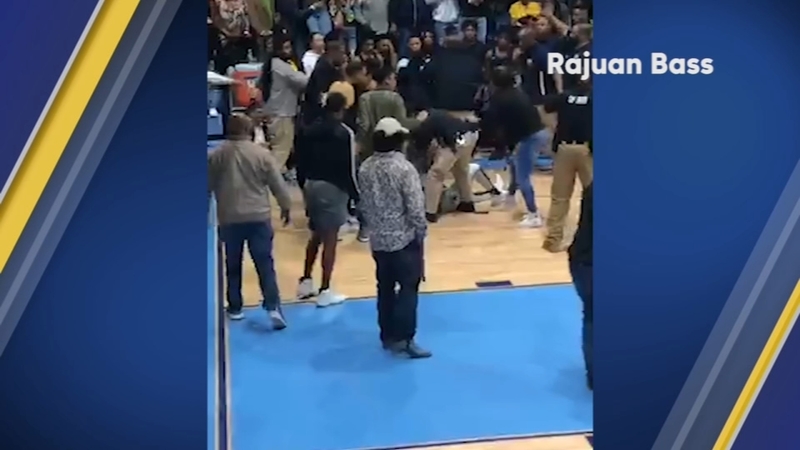 The fight broke out with less than 20 seconds to go Tuesday at South Granville High School as the Vikings led Reidsville 72-66 in a playoff game.

During a timeout, 20-year-old Tyrell Thorpe, a South Granville fan and alum, grabbed a pro-Granville sign and ran across the court toward the Reidsville team and fans.

Thorpe, as well as a Reidsville fan, are now facing charges.

Video from the gym shows a scuffle develop after Thorpe ran to the Reidsville side of the court. He said an officer tried to grab him but that's when a Rams fan entered the fray and the fight began.

Police said Thursday that "while all initial reports outlined a singular incident as the cause of the game disruption, the police department's investigation revealed two separate incidents involving two separate fans was the cause."

Police described Thorpe as "an overzealous male fan" who pushed past an officer, onto the court area, and stopped directly in front of the Reidsville bench."

Police also said fan and police body camera footage showed that Thorpe was in the "close personal space of the Reidsville players and coaching staff while waving the sign in the face of several players."

They said officers "immediately removed Thorpe from the player area and restrained him on the floor."

After Thorpe was removed from the court, things "began to calm down," police said.

But then, about 30 seconds later, a female fan, Bria Pass, 26, of Reidsville, tried to push past an officer to gain access to the court area, police said.

An officer grabbed Pass and she repeatedly attempted to jerk away, police said. On the body camera footage, she is seen "resisting the officer and flailing and/or swinging widely until a second officer assists with restraining Ms. Pass on the floor."

At that point, fans, Reidsville players, and a cheerleader came onto the court and officers intervened.

Pass and the officer who initially grabbed her were still on the floor and when the crowd did not back off, officers used pepper spray to restore order, police said.

"It is certainly upsetting that the actions of two individuals can overshadow the hard work and dedication of these student-athletes and coaching staffs," Creedmoor Police Chief Keith King said in a release. "The police department appreciates the cooperation of both Reidsville and South Granville High Schools throughout this investigative process."