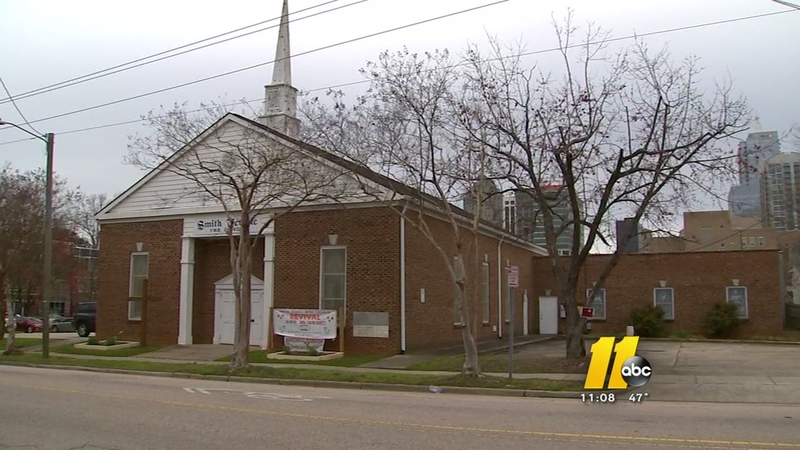 Shockwaves as historically black church up for sale

RALEIGH, NC (WTVD) -- Raleigh's downtown revitalization is quickly expanding eastward - transforming some communities from low-income to high-end. There was already concern about many long-time residents being forced out. But there was shock this week as word spread that a decades-old church in southeast Raleigh was now up for sale.

"It's the church of my upbringing, where I grew up. It's actually where I got married," said Jessie Jeffers who still considers Smith Temple Free Will Baptist Church on S. East Street to be his family church.

For eight decades, the church has been a beacon on the corner of East Davie and Martin streets.

"If someone's from Raleigh, from southeast, then they know Smith Temple," Jeffers said.

But these blocks of southeast Raleigh are quickly becoming more identified as downtown Raleigh. And that comes with downtown prices

Those new townhomes recently built down the street start at over half million dollars. Rent at the newly built luxury apartments goes for between $1,000 to $2,000 a month. This low-income neighborhood is going high end. And Smith Temple can't afford to grow here.

"The price has gone up," Jeffers explained. "So for the church to try to expand their parking lot or do anything different around where they are- it's just too expensive."

“Are you kidding me?!” - Shock in southeast Raleigh as an 80-year old historically black church goes up for sale; sparking new concerns about the neighborhood’s gentrification. #abc11 pic.twitter.com/CnSMPQD5ge

Southeast Raleigh advocate, Diana Powell says she and many in this side of the city reacted in shock when they heard the news of Smith Temple's impending sale.

"Are you kidding me?!" she said, describing her initial reaction.

The church is asking $4.3 million for the property which has increased in value as the neighborhood quickly gentrifies.

Powell has been sounding the alarms about the unintended consequences of downtown's renaissance: Lost heritage in a once proud African-American enclave where many black Raleighites owned businesses and worshipped in churches like Smith Temple that dot many of these corners.

"A lot of that property in southeast Raleigh is history," Powell said. "That stuff was built on the backs of our black community, our black leaders.

"You can ride through downtown, you can ride over southeast, there's so much construction going on people are being displaced. This gentrification has really gotten out of hand."

But Smith Temple church leaders made clear, the church is not being forced to move.

In fact, the selling price may just ensure the church's future-- albeit somewhere else.

"It's bittersweet to see that it's for sale. But that's the brick and mortar. The real church is the people that make up that church," Jeffers said.

Smith Temple's Pastor, Oscar Holland told ABC11 over the phone that church leaders are still unsure where this congregation will move - if and when the property finds the right buyer.