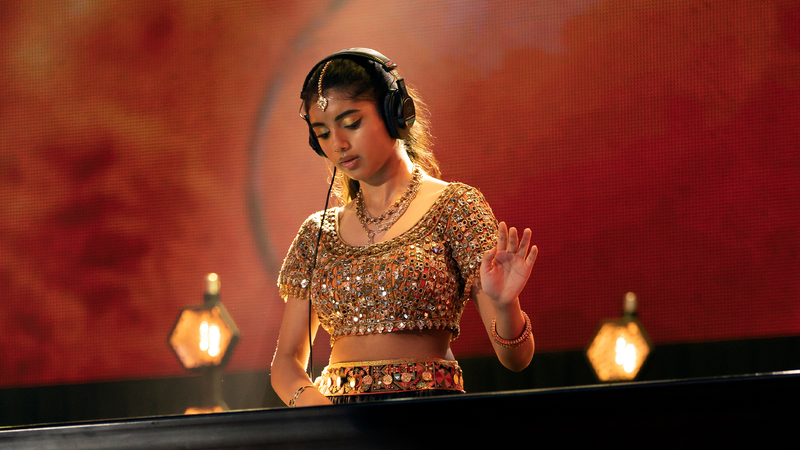 "Spin" is making history as the first Disney Channel original movie to focus on an Indian American family. But it's doing more than just breaking barriers -- the film is a depiction of the beauty in embracing and blending two rich, diverse cultures.

The movie follows Rhea, an Indian American teen, whose life revolves around her eclectic group of friends, her family's Indian restaurant, an after-school coding club and her tight-knit multi-generational family. Rhea discovers her natural talent for creating beats when she falls for aspiring DJ Max, which takes her on a musical journey of embracing her cultures and infusing them into her passions.

Actress Avantika Vandanapu (Rhea) feels "so incredibly lucky" to be in this trailblazing role and hopes Rhea can inspire audiences to feel like they can do anything.

"As soon as I read the script, I had a feeling that this was going to be a very monumental film for the South Asian community and truly for representation in Hollywood," Vandanapu told On The Red Carpet.

Sandy takes a look at "Spin," "The Descendants: Royal Wedding," and "The Magic Bake-Off"

From the food to the Bollywood music and dance influences, "Spin" delivers a modern, yet authentic, take on the Indian American experience. One scene even features a color run, which is inspired by the Hindu celebration of Holi, also known as the Festival of Colors.

"It's a little bit of the spirit of India, really. It's the slice of life of what the typical Indian American experience is," director Manjari Makijany said, adding that the film itself is a "melting pot" of cultures.

"This movie does a great job of showing that you can embrace your culture and also just be so many different things. You don't just have to pick doing one thing," Anna Cathcart (Molly) said.

Jahbril Cook, who plays Rhea's friend Watson, hopes audiences come away from the movie feeling inspired to pick up a new skill or hobby.

Renowned Bollywood star Abhay Deol portrays Rhea's dad, Arvind. He recognizes that as the first Disney film focused on an Indian American family, "Spin" has already broken many boundaries, but goes even further to show audiences how similar we are cross-culturally.

"At the heart of it, it could be any family. It could be any ethnic background. It's a story of America, which is a country of immigrants," Deol said. "We may all look different slightly or we may have a few cultural quirks here and there that are different, but at the heart of it, we're all one in the same when it comes to family and love and values."