NC sports gambling advances in House as session winds down 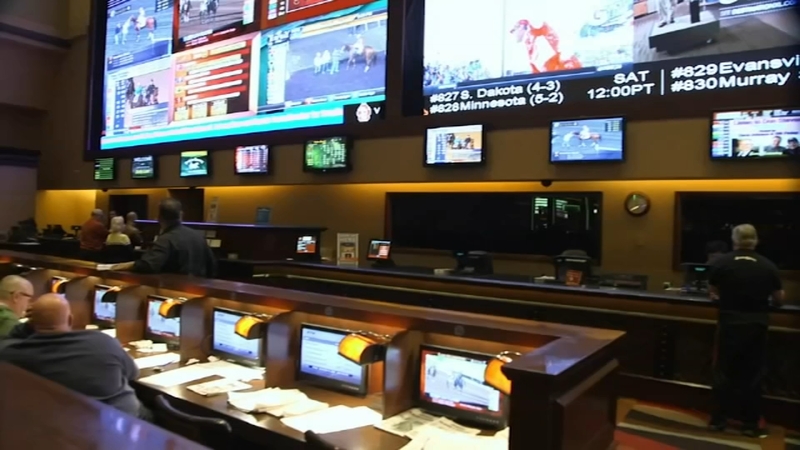 RALEIGH, N.C. -- A late-session effort to authorize and regulate sports gambling in North Carolina pressed forward Tuesday in the state House, nearly a year after a measure that would make such betting lawful cleared the Senate.

A divided House judiciary committee voted for two bills - one the exact same legislation that passed the Senate and another that makes edits to that proposal.

The changes were the product of negotiations among legislators and Democratic Gov. Roy Cooper's office, a key legislator said. Representatives of major sports leagues, North Carolina-based pro franchises and casino operators also have been involved in the broader legislation.

"We had ... a ton of other people involved in this, and it was slow-moving and a lot of conversations. This is an individual issue and some are comfortable, some are not," said Sen. Jim Perry, a Lenoir County Republican shepherding the gambling legislation, which both passed the committee by 6-3 votes.

The legislative maneuvering - passing two bills instead of amending the original Senate measure - reflects the unusual nature of the gambling issue in a Republican-controlled General Assembly where social conservatives still carry great weight. Democratic support will be needed for sports wagering to become legalized.

The two-bill strategy also means the Senate, where more than half of the Republicans voted against the initial measure last August, wouldn't be put on the spot again to vote on the primary piece of legislation.

"38 only becomes law if 688 is passed," said Senator Jim Perry, primary sponsor of the bill. "They are dependent upon each other. We still have schools to build, we still have needs and I was hoping to have more funds available to deal with things of that nature."

Nearly 20 states including Virginia and Tennessee have legalized online gambling. You can gamble on sports in North Carolina but you have to go to a casino to do so.

After two more committee meetings, the bills could reach the House floor later this week.

Democratic Gov. Roy Cooper has said he's ready to sign sports wagering legislation that's brought to his desk. The idea is advancing as legislative leaders insist they will wrap up their annual work session around July 1.

Since the Senate bill cleared a House commerce panel last November, backers of sports betting made significant changes to the revised package, including higher tax rates and fees for gambling companies who get one of the state's prized operator licenses.

The North Carolina Education Lottery Commission still would issue between 10 and 12 interactive sports wagering operator licenses along with supplier and service provider licenses.

The licensees could set up online apps so people within the state's boundaries could play on their phones starting in January.

The updated legislation adds out-of-state horse racing to the list of professional and college sports that could be wagered upon. And NASCAR tracks are identified among the types of professional sporting venues that could have in-person betting at the site or close by.

License applications and renewals would be much higher than the Senate measure proposed. A sports wagering company would have to pay a $1 million application fee for both an initial five-year license and renewals, for example.

The package also would require interactive sports wagering operators to pay a 14% privilege tax based on gross wagering revenues minus players' winnings and other deductions. That deletes an 8% tax on adjusted gross revenues that had been in the Senate measure.

After expenses are paid to the lottery commission and Department of Revenue and $2 million goes annually for problem-gambling programs, the remaining net proceeds would be split between the state's coffers and a special fund designed to attract sporting events and attractions to the state.

Interest in sports gambling among the states took off after a U.S. Supreme Court ruling in 2018. Twenty states and the District of Columbia now offer mobile sports betting, including Virginia and Tennessee, according to the American Gaming Association, while 28 states and D.C. have some kind of in-person betting.

The Eastern Band of Cherokee Indians opened on-site betting operations in 2021 at its two far western North Carolina casinos thanks to earlier legislation.

Backers of North Carolina sports gambling regulation say such betting already occurs through offshore online websites or local bookies, and it's better for the state to control the activity and tax it.

But critics say the additional revenues that state sanction of sports betting would create pales in comparison to the negative effects upon family and society that the increase in the number of gambling addicts will cause.

"These gambling bills conflict with my values," said Rep. Abe Jones, a Wake County Democrat, former judge and committee member. "I'm not going to use my vote from this place to support gambling. I think it's wrong."

Republican leaders used a chamber rule to add additional GOP spots on the panel so that the bills could pass, even as some other GOP committee members were absent.