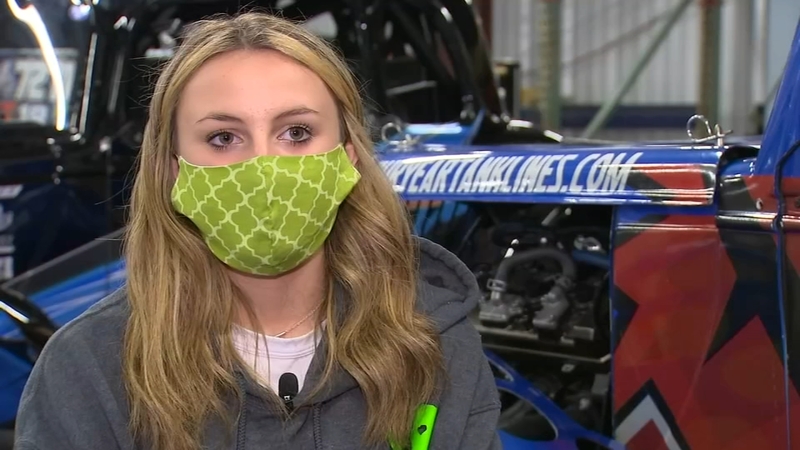 RALEIGH, N.C. (WTVD) -- A Raleigh teen who dreams of becoming a NASCAR driver is turning heads at the race track -- not just for her speed and driving skills but for diversifying the sport.

13-year-old Phoenyx Kimball is starting 2021 in the lead.

"I just like going fast and it's really fun," she said.

"It's awesome, it's really awesome," said her dad, Leroy Kimball. "Being her first year and first kind of go at this thing, and she's already blowing people's doors off, it's awesome to watch.

"Her getting out on the track the first time and putting the hammer down on that thing, I was, I had some heart-pumping going on," Kimball added. "It did freak me out a little bit. Seeing her out there in the carts, she's really good with handling them."

Phoenyx started racing go-karts at Rush Hour Karting when she was 7. In September, she took her talents outside and into a Bandolero car for Dillon Spain Motorsports and just this month won two races at the INEX Winter Nationals in Florida.

"She really surprised me down in Florida," said Dillon Spain, her trainer. "I was hoping that we could be competitive when we went down there. That was her first time on a short track where she had to lift off the throttle. She did a couple races on bigger tracks but out of the box she was one of the fastest cars on the track, and she was in contention to win every day, and she did win a couple."

Her dad recalled people in Florida not realizing a girl was behind the wheel and having to throw their words in reverse when she took her helmet off.

"They kept saying he, and he's doing great, and he's hitting his lines every time," Kimball said. "She pulled up to the winner's box, and she got out and they had to change their whole tune that this girl won and not this boy won."

Phoenyx admitted it does bring some satisfaction.

"It's fun racing against boys and knocking them out," she said.

Phoenyx said Dale Earnhardt Jr. inspired her to get into racing, and that's where the No. 88 on her car comes from. She now hopes to inspire other young girls.

"After watching all of these NASCAR drivers like Dale Earnhardt Jr., I've just been like, if they can do it, I can do it, too no matter if they're a boy and I'm a girl," she said. "Most girls when they look at me, they're like, wow you actually race? I just encourage them that it's normal and they should get into it."

Her proud dad said Phoenyx is showing that gender doesn't matter if you set your mind to pursuing your interests.

"It's not just guys that can go out there and do these manly things, the girls can do it and excel and be better than the guys at it," Kimball said. "I think that's showing them that they can be confident in what they want to do, and they can do those things."

Phoenyx, who is still a few years away from getting her driver's license, continues to push toward her NASCAR dream -- she'll be racing the road course at Charlotte Motor Speedway this weekend. She hopes to get some sponsorship help to continue moving up in the sport.
Report a correction or typo
Related topics:
sportsraleighnascarautomotivecool kidsteenagergood sportsdriving
Copyright © 2021 WTVD-TV. All Rights Reserved.
More Videos
From CNN Newsource affiliates
TOP STORIES