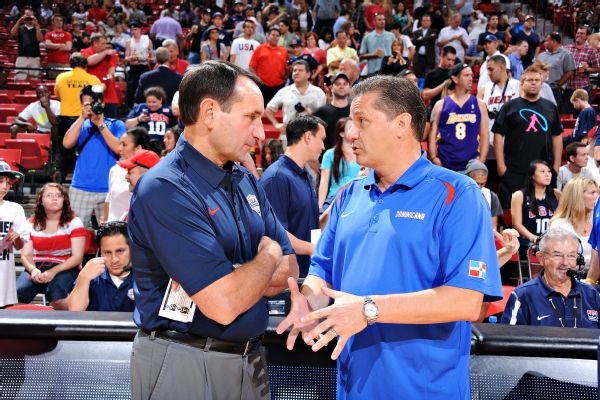 While the debate over paying college athletes continues, 14 men's basketball coaches earned at least $3 million this season, according to an annual list published Wednesday by USA Today.

Duke coach Mike Krzyzewski, at $8.98 million, and Kentucky coach John Calipari, at $7.45 million, continued to top the list, with each getting a sizable raise this season. Krzyzewski saw an increase of more than $1.5 million this year, and Calipari's salary went up almost $1 million.

Arizona's Sean Miller leads all Pac-12 coaches at $3.65 million (sixth on the list). Hisstatus at the school is unclear amid an ESPN report that he was involved in a discussion regarding a $100,000 payment to a recruit.

Ohio State's Chris Holtmann, third on the list at $7.14 million, is one of four Big Ten coaches making at least $3 million. Holtmann's contract will pay him about $3 million this year in annual compensation, including base salary, media appearances and money from sponsors Coca-Cola and Nike, as well as deferred compensation. The $7 million includes money that Ohio State had to pay for Holtmann's buyout from Butler, as well as taxes on the buyout.

Kansas' Bill Self leads Big 12 coaches with a salary of $4.77 million, fourth on the list. Other top-grossing coaches from the conference are West Virginia's Bob Huggins at $3.75 million (seventh), Texas' Shaka Smart at $3.1 million (11th) and Oklahoma's Lon Kruger at $3.1 million (12th).