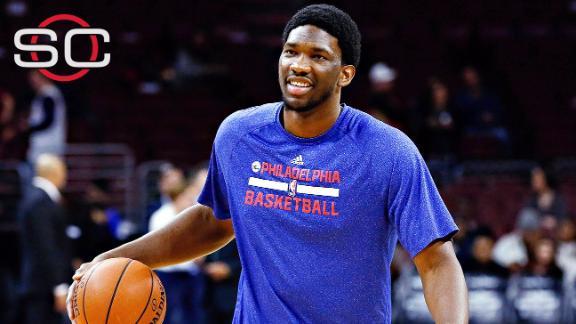 Philadelphia 76erscenter Joel Embiid has suffered a setback in his long recovery from a stress fracture in his right foot, the team said Saturday night.

"As part of the conservative approach focused on the long-term health, recovery and care of Joel, we have been closely monitoring his progress, regularly evaluating his status and adjusting our plans accordingly," team president and general manager Sam Hinkie said in a statement. "Recently, Joel and Sixers personnel traveled to Los Angeles for a series of routine exams with a number of physicians who have been actively involved throughout this process.

"During his visit with Dr. Richard Ferkel, a standard CT scan on Joel's right foot revealed less healing than anticipated at this point. Our priority remains providing Joel with every opportunity to ensure he has a long and successful NBA career, and as such, these findings cause us to pause and reassess his current activities.

"Together with Joel and his representatives, we will continue to consult with the experienced team of doctors who have been an integral part of his evaluations, while also engaging in dialogue with a broader set of experts and specialists. Discussions regarding the appropriate next steps are currently ongoing and we will share an update once it becomes available."

According to Yahoo! Sports, the No. 3 overall pick in the 2014 draft had "vigorous" workouts for several weeks and felt no pain, but the CT scan revealed the issue.

The stress fracture to the navicular bone in Embiid's right foot was suffered in the days leading to the 2014 draft. With questions surrounding potential back issues as well, Hinkie said after the draft that the Sixers consulted various doctors and felt confident there was little long-term risk to the former Kansas star's health once the foot healed.

"I sniffed opportunity," Hinkie said at the time. "The moment he got hurt, we thought we might get him. We might be just the organization with just the set of owners, and we might be the one to do it."

He also reportedly suffered what was deemed a minor setback in March, but coach Brett Brown downplayed it as "soreness."

Embiid was expected to participate with Philadelphia's summer league teams.

The 7-footer averaged 11.2 points and 8.1 rebounds for the Jayhawks, blocking 72 shots and earning Big 12 defensive player of the year honors.