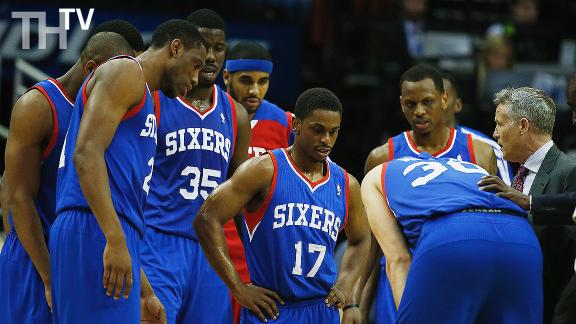 Being the potential heirs of a franchise that matched an NBA-record losing streak comes with a few hardships not usually found in the luxury suites.

Get the Sixers going? That was never the point this season, not for a franchise that decided spinning its wheels in mediocrity for most of the past decade was never going to win it a championship. The Sixers needed to gut the roster, collect draft picks, build for the future and lose games.

So they did, including the whopping 26-game stretch that helped stick them at 19-63 and solidified a 19.9 percent chance at winning the No. 1 pick in the NBA draft.

"I think the season has been a huge success for us," Harris said Friday.

Give Harris credit for his honesty. The Sixers hold two lottery picks (one via a trade) and never were shy about admitting they had to tank -- make that, rebuild -- this season in order to start their hopeful championship track.

"We don't use that word," Harris said of tanking.

He said losing was tough for everyone in the organization, but this season was never about the final record.

Philadelphia had little reason to feel proud this season. But the Sixers could at least be hopeful with what's ahead. Michael Carter-Williams, a 6-foot-6, 185-pound point guard, is the leading rookie of the year contender and played like a future All-Star. He was selected Eastern Conference rookie of the month Friday for the fourth time this season.

Nerlens Noel, the rookie center who sat out all season as he recovered from a torn anterior cruciate ligament in his left knee, dazzled coaches with his work ethic and workouts all season.

Harris said the Sixers need at least two to four elite players to become a player again in the NBA. Could two lottery picks plus Noel and Carter-Williams serve as the ingredients in the magic formula that helps lead the Sixers to their first championship since 1983?

"All these pieces are in place to make this an elite team that will compete consistently for the NBA championship," Harris said. "There's no shortcuts to it. Unfortunately, it takes a long time. I'm really happy with the progress."

Harris has faith in general manager Sam Hinkie to make the right calls, and he gave first-year coach Brett Brown an A for his leadership under trying circumstances.

He also thanked the fans for sticking with the Sixers.

"I put my football helmet on and my pads and I was ready for bottles to fly," he said. "But the fans really understand what we're trying to do. It's been 90 percent positive and 90 percent supportive and understanding."

He also urged patience and knows another dreary season is likely ahead.

Harris is one of three founders of Apollo Global Management, a publicly listed alternative investment manager. The 76ers were valued this year by Forbes at $469 million, 23rd in the NBA, and have both a television deal with cable station Comcast SportsNet and a lease with the Wells Fargo Center through 2029. Harris bought the group for about $280 million in October 2011.

Apollo invests heavily in distressed properties -- which one could argue would include the Sixers. The Milwaukee Bucks were sold this week for a reported record $550 million, a sum that could make even billionaires consider selling for a tidy profit.

"Clearly, this has been a successful investment so far for the ownership group," he said. "But the reality is, I don't think we're going to sell this investment for a long time. I expect my kids to be around the Sixers. We're building this thing for the long run."

Forbes also valued the 49-year-old Harris' net worth at $2.7 billion. Harris and a partnership group bought the NHL's New Jersey Devils in August, and he refused to rule out the possibility of buying another sports franchise.

Harris also said the Sixers are considering several sites for a new practice facility and hoped to announce plans this summer. The Sixers could have it built in time for the 2016-17 season.

He said there was no decision on who would represent the team at the draft lottery.

The person at the podium doesn't matter. It's the one the Sixers take who will change the course of the franchise.

Who Broke the 76ers?
They're unwatchably bad, and yet also very well run. Who's to blame for this mess?

Sixers Avoid Infamy
Israel Gutierrez discusses the pride demonstrated by the 76ers as they snapped a 26-game losing streak against the Pistons.