A-Rod 'disappointed' by All-Star omission but not surprised 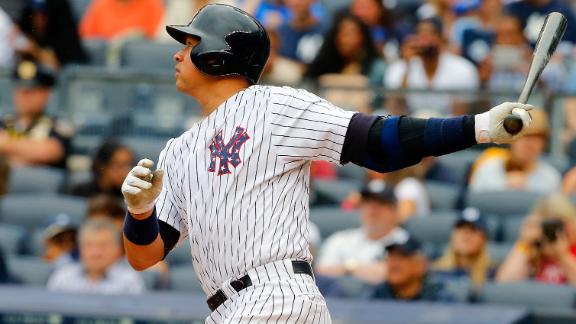 NEW YORK -- He had said he would walk to Cincinnati if necessary to play in next Tuesday's All-Star Game, but now that a long, long walk is no longer necessary, Alex Rodriguez said he will relish the opportunity to take a few days off.

"I'm obviously disappointed," Rodriguez said in the New York Yankees clubhouse before Tuesday night's game against the Oakland Athletics. "It would have been fun to go out and represent the American League, that's for sure. But I know that while serving the suspension, the time off was very good for me. I hope the four days will be, too."

Rodriguez was hoping to be added to the AL squad as a reserve DH -- Nelson Cruz of the Seattle Mariners won the fan voting -- but his chance to go the game for the first time since 2008 was spoiled when Prince Fielder of the Texas Rangers, who came in third in the voting as a first baseman, was named the backup DH after voting by the players, managers and coaches.

"I think the fans made a very wise choice and I think [Ned] Yost had a very difficult decision," Rodriguez said. "You can't go wrong with Prince. He's had a phenomenal year and he's also a big comeback story, so I'm happy for Prince."

Rodriguez, who is having a surprisingly good season as the Yankees DH, with a .284 batting average, 16 home runs and 47 RBIs to go along with a .902 OPS, last played in an All-Star Game in 2008 at Yankee Stadium.

He was selected two other times subsequently -- he is a 14-time All-Star -- but did not play in 2011 or 2012 because of injury. He said that before the season, the thought of making it for a 15th time never entered his mind.

"I wish I could tell you it was [a goal]," he said. "My goal early on was to make the team and I had no idea what to expect. I didn't know how many at-bats I was going to get."

Remarkably, Rodriguez has played in 77 of the Yankees first 82 games, and has more at-bats (271) and hits (77) than any of his teammates other than Brett Gardner and Chase Headley. Still, Rodriguez sounded as if he knew the odds of his ending up in Cincinnati, by foot or any other method, were highly unlikely.

"I knew I was a long shot," he said. "I gave myself a long-shot hope. There are so many great players in the American League and I'm only a DH. For a long time, I was at shortstop and third base and there were multiple ways of getting in. I'll be watching, I'll be cheering and I hope we get home-field advantage."