Confessions of a UNC cheerleader: The Road to the Final Four

This is March Madness and as a Tar Heel cheerleader in 2009, I tasted just how sweet it can be.

Fortunate enough to don that Carolina blue uniform throughout my undergraduate years at UNC-Chapel Hill, I never took for granted all the times I got to flip around in the Dean Dome, have a court-side seat to a home game against Duke, or travel with the Heels in March.

Even the most diehard basketball fans are usually surprised to learn that as a UNC cheerleader, I never stepped foot inside Cameron Indoor Stadium for one of those historic rivalry games.

Cheerleaders don't get to go with the basketball team to away games during the regular season, so we really did live for Selection Sunday.

In 2009, Roy's Boys consisted of Tyler Hansbrough, Ty Lawson, Wayne Ellington, Danny Green and Deon Thompson just to name a handful-- the bench was deep and expectations were high.

Perhaps we, the cheerleaders, were those guys' biggest fans. The more they won, the farther we traveled, the closer we got to being a part of history with the team we loved.

First Greensboro, then the Sweet Sixteen and Elite Eight in Memphis. Before we knew it, the Heels were cutting down the nets and we were on our way to the Big Dance in Detroit.

We have coaches, but there are no team managers in Carolina Cheerleading. We decided which uniforms to wear ahead of time and each one of us would be responsible for packing all the necessary pieces, pom poms and those big blue "U-N-C" signs included. 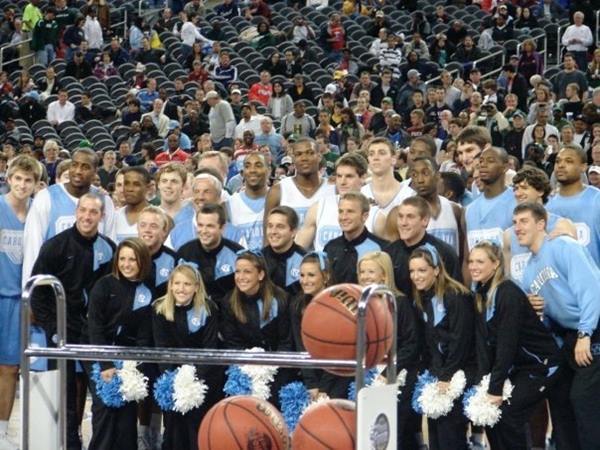 Hanging with the Heels at Final Four practice in Detroit

Traveling with the Tar Heels during tournament season is all business. I actually wore a pinstripe power suit (with shoulder pads!) on the flight home from Detroit. But hey, let's not forget I was also a news reporter in training at that time.

Each round, in between games, we got to have some fun of our own. In Memphis, we explored Beale Street and learned how to be Duck Masters at the famous Peabody Hotel.

In Detroit, we got a private tour of the Motown Museum.

Only 12 cheerleaders get to join a small contingent of the band during the NCAA Tournament. By the time we reached Motor City before any basketballs were dribbled, I remember already feeling like I was a part of something much bigger than myself.

Now, just because you're with the entire UNC Basketball program, on the hunt for a national championship, doesn't mean you're off the hook when it comes to school work. As a cheerleader on college basketball's biggest stage, your days at the Final Four are packed. Between early morning TV appearances, pep rallies and practice, you find time to maintain that GPA.

Oftentimes, my teammates and I would be holed up in a hotel room studying or catching up on what we missed in class the week before. It was worth it, of course. And you'll never find a soul who tells you differently. 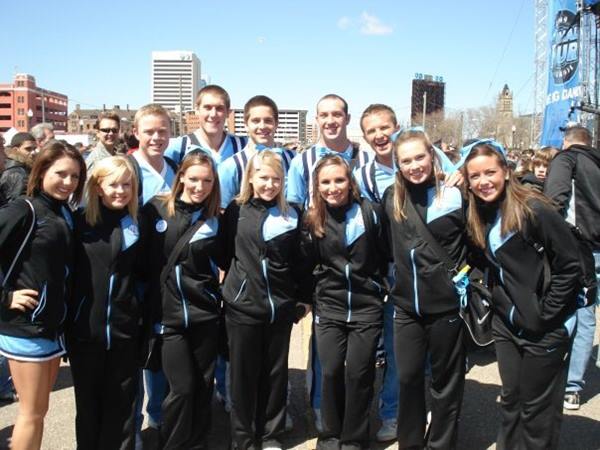 Holding onto the memories

Nothing compared to Ford Field. I had cheered a lot of games by that point of my junior year; football bowl games, even another Final Four with the UNC Women's Basketball team in 2007 (Ivory Latta, anyone??). But to be tumbling across the hardwood of that raised court in the center of Ford Field, I had never felt so small, and yet so full of pride for my university and our storied basketball season in the making.

The Tar Heels came to win and win they did. Just as Roy likes to do the math in the locker room after each tournament victory, so did we, sitting on the baseline. In the Final Four game against Villanova, we knew well before the buzzer, we were taking this thing from four teams down to two and we had a game to be ready for on Monday.

It was the day of the National Championship and we were on our feet going from one event to the next, rallying Carolina fans for hours before tip-off.

There we were, game time at the National Championship. Adrenaline was pumping and our hearts filled with hope. This, as they say, was a great day to be a Tar Heel.

Running and tumbling out on the court during timeouts, especially as the clock ticked closer to the end of the second half, it felt like all of Ford Field, painted a mostly solid shade of hunter green from the thousands of Michigan State fans who'd invaded Detroit, stood still.

It made for a hushed finale to what turned out to be yet another Carolina-dominated game, this one for the title. My own voice was shot, making me all the more aware of the relatively small, but loud section of devoted UNC fans and then, confetti falling in slow motion. 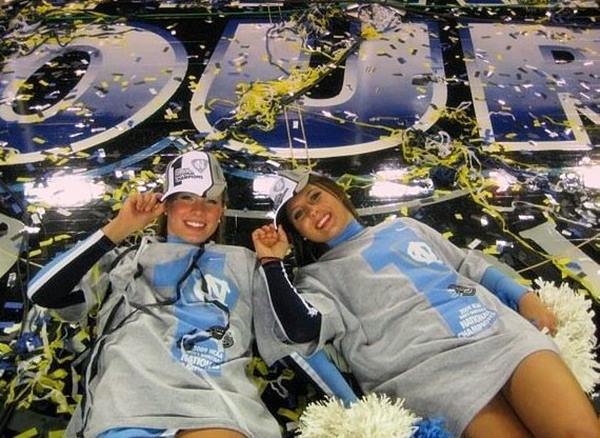 On the court at Ford Field, finally #1

The Heels had done it. Roy's Boys were National Champions.

We were giddy with this storybook ending we got to claim a small piece of. After a few minutes of snapping pictures in our new Championship swag, it was back to the team hotel for one more pep rally.

When it was over, I remember the band director, Jeff Fuchs, gathering us all together for a toast that cemented that feeling which had been running through our veins for weeks.

He talked about the hundreds of thousands of students who'd attended UNC-Chapel Hill since its founding, and how before that year only a few dozen Tar Heel Cheerleaders had been on the court during a National Championship victory.

Now, he said, there had been a dozen more.

History had been made and for some reason, I got to enjoy that court-side seat. It was finally time to go back home.

I'll never forget the motorcade from RDU to Chapel Hill, it will always be one of my favorite memories. As soon as the team plane touched down, many of us were getting texts from friends and family watching it on the news. 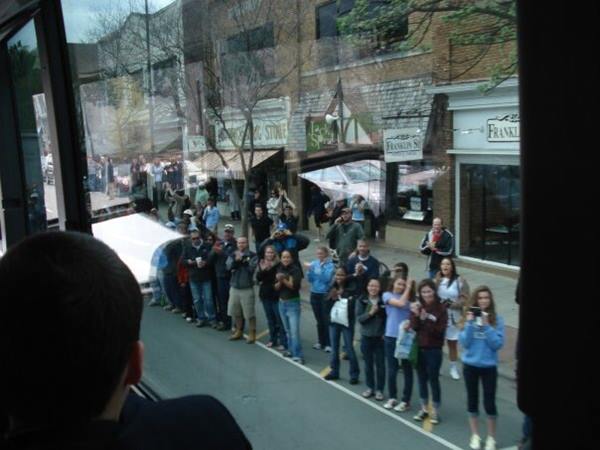 Riding on a charter bus with the band, following behind the team, we peered out the windows to see students and fans of all ages lining Franklin Street, holding signs, waving and cheering on the new NCAA Men's Basketball Champions.

Every corner we turned before pulling up to the Dean Dome, people were there, wearing their Carolina blue, beaming back that pride we still had ringing loudly in our hearts.

We were home and this is where the winner stays.