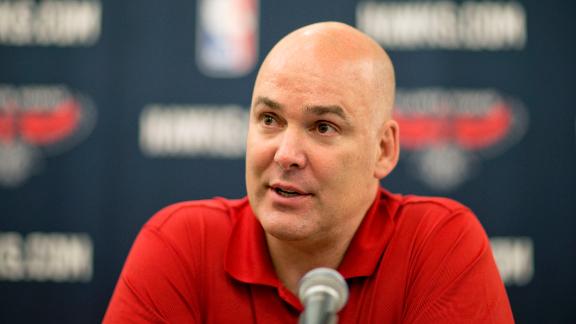 Commissioner Adam Silver does not believe Atlanta Hawks GM Danny Ferry should be fired for comments he made about Luol Deng, he told USA Today on Wednesday.

Ferry has come under fire for comments he made about Deng on a conference call in June.While discussing potential free agents with Hawks owners, Ferry, referring to a scouting report, said that Deng "has a little African in him. Not in a bad way, but he's like a guy who would have a nice store out front but sell you counterfeit stuff out of the back." Ferry also referred to his report saying that Deng was "two-faced."

"The fact that he was looking at the scouting report as a reference when he was making these remarks, what I'm saying is -- and frankly my opinion -- is that this is a team decision in terms of what the appropriate discipline is for their employee," Silver told USA Today. "But if I'm being asked my view, I'm saying that, based on what I know about the circumstances, I don't think it's a terminable offense."

Hawks CEO Steve Koonin said Tuesday that Ferry had been disciplined but would be allowed to keep his job. He did not specify the punishment but said that the decision was made after a law firm's three-month investigation into the comments.

Koonin said Atlanta law firm Alston and Bird went through 24,000 documents, conducted 19 interviews and read "every email Danny Ferry has ever sent as general manager of the Atlanta Hawks." Koonin said no other negative information on Ferry was found in the probe.

"The discipline of a team employee is typically determined by the team, and in this case the Hawks hired a prestigious Atlanta law firm to investigate the circumstances of Danny Ferry's clearly inappropriate and unacceptable remarks," Silver said in the USA Today interview. "In my view, those comments, taken alone, do not merit his losing his job."

Others, such as Magic Johnson and Atlanta civil rights leaders, have called for Ferry's resignation.

Ferry called Deng and his agents over the weekend to personally apologize and addressed the situation in a statement Tuesday.

"Those words do not reflect my views, or words that I would use to describe an individual and I certainly regret it," Ferry said. "I am committed to learning from this and deeply regret this situation. I fully understand we have work to do in order to help us create a better organization; one that our players and fans will be proud of, on and off the court, and that is where my focus is moving forward."

Deng commented on the situationTuesday, saying he was "saddened and disappointed" by Ferry's remarks.

Information from ESPN's Brian Windhorst and The Associated Press was used in this report.