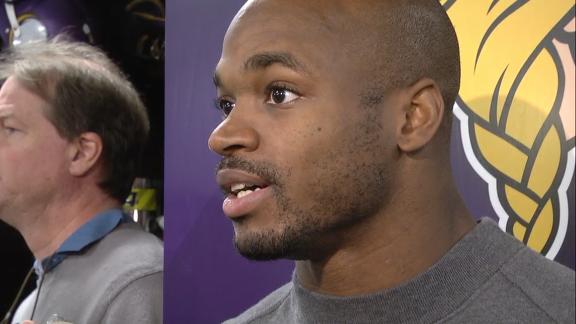 EDEN PRAIRIE, Minn. -- Adrian Peterson won the NFL rushing title at age 30 this season and has made it clear he believes he's the best running back in the NFL. The runner-up title? That goes to a veteran who will be on the opposite sideline Sunday.

The Seahawks'Marshawn Lynch, Peterson said, is the second-best back in the league, despite having played only seven games and gaining 417 yards this season. Before that, Lynch, 29, had run for at least 1,200 in each of the past four seasons.

Lynch figures to start for the Seahawks in Sunday's NFC wild-card matchup with the Minnesota Vikings, and Peterson is looking forward to seeing him.

"I remember coming out [of college] with him. We trained together in Arizona, and I knew he was going to be a force to be reckoned with," Peterson said. "He's 'Beast Mode' for a reason: He's a physical runner. He plays fast. His lateral movement, cuts, his vision is top of the line. Even though he didn't play much this year, I would say he's probably the second-best back in the league. I'd give it to him, hands-down."

"I'm a guy with a little more speed. I don't think he's got the same jump-cut as me. But his lateral movement, his ability to get through guys is amazing."

While Lynch has been a full participant in practice this week after returning from abdominal surgery, Peterson missed his second day of practice Thursday after sitting out part of Sunday night's game with a low back injury.

Peterson, though, said he'll be "ready to roll" for Sunday's game, and coach Mike Zimmer said there wouldn't be any restrictions on Peterson.

"It's the playoffs," Zimmer said. "He's ready. He'll be fine. He's feeling much, much better."